ARTISTS WHO WERE WW2 PRISONERS OF WAR UNDER THE JAPANESE 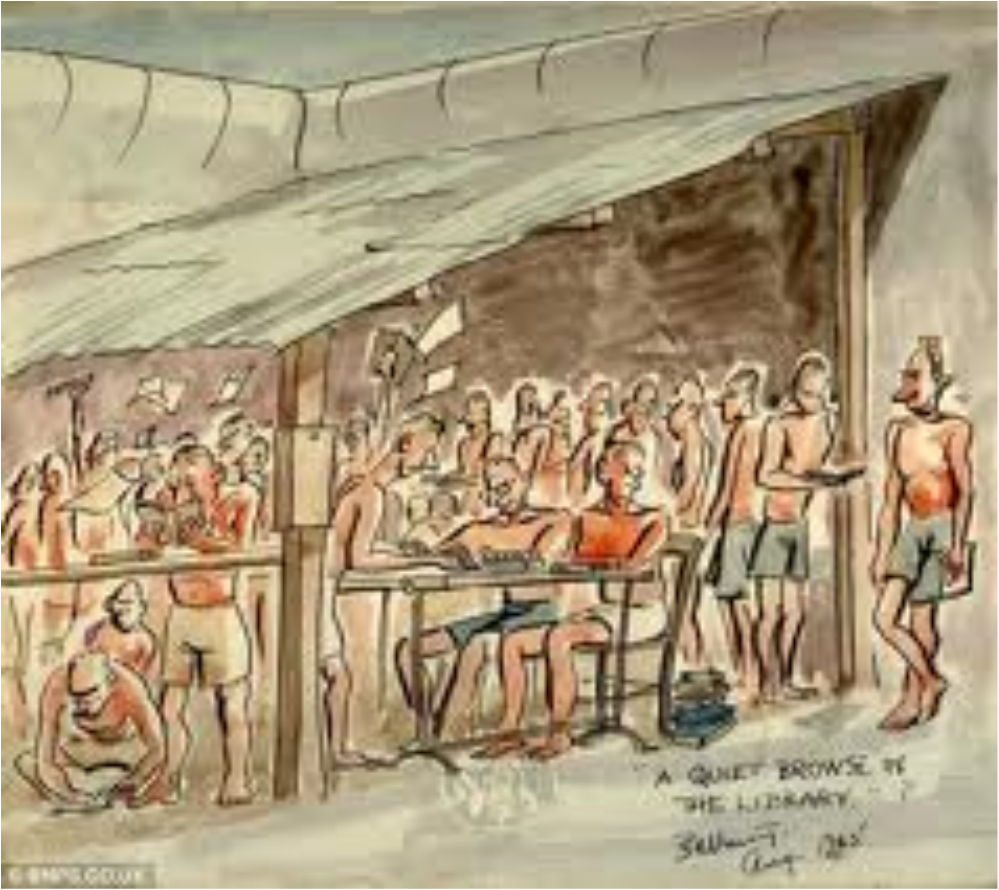 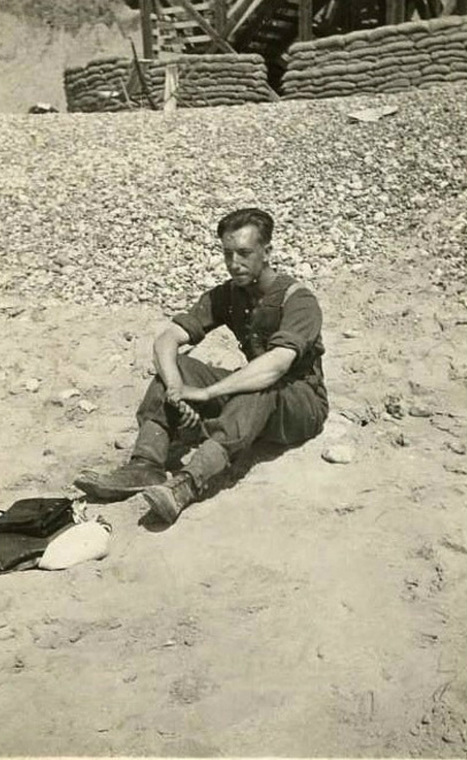 ARTIST % POW TO THE JAPANBESE - DES BETTANY
Born in the Lancashire mill town of Burnley the year after the First World War ended, Des grew up the second of 4 children. While attending Secondary Boys’ School and Technical College, he developed an interest in art and music. On leaving school he trained as an analytical chemist and worked in the chemistry lab of an artificial silk factory. He became a lifelong fan of U.S. harmonica virtuoso Larry Adler, and was given his first harmonica by the man himself when he turned up at the stage door of a local theatre where Larry was performing, asking staff to present Adler with a pencil portrait he had drawn from a photo (he couldn’t afford to attend the concert). He was invited to meet Larry who presented Des with one of the many harmonicas he travelled with. The musical and entertainment bug must have bitten, as in his spare time he began entertaining the children in a local cinema with his harmonica and art work, as ‘Uncle Desmond’. Many years later he was to form a successful harmonica trio.

Early in 1939 he and a number of friends joined the Territorial Army (Royal Artillery) and was mobilised in August of that year. Lance Bombardier Bettany fought in France and Belgium with the 88th Field Regiment, Royal Artillery, manning 25 pounder field guns, and after evacuation from Dunkirk, served in various locations in southern England, in preparation for the anticipated German invasion.

He was then re-equipped and shipped to the Far East, travelling on the troopship ‘Empress of Canada’ via Freetown (West Africa), Cape Town and Colombo, Ceylon (Sri Lanka). In the Malayan campaign he fought the Japanese at Ipoh and Alor Star. He was at Kuantan on the east coast, off which the ‘Prince of Wales’ and the ‘Repulse’ were sunk. In the company of the Australian 8th Division and the Indian 9th Brigade, he saw most of the major actions in Malaya until capitulation in Singapore in February 1942. 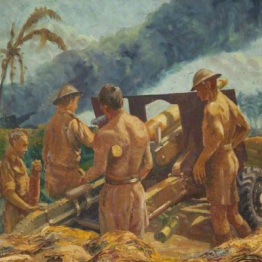 Singapore to clear up and salvage damaged equipment for the Japanese war effort. Later moved to Changi gaol, Des joined working parties which among other tasks were required to clear swamp country to build an airfield, on the site of the current Changi International Airport. One work party had the task of breaking up damaged vehicles into spare parts, sometimes with totally inappropriate tools. Acts of minor sabotage were carried out at great risk, and some cheeky but risky activities undertaken which, to the benefit of the prisoners, took advantage of the perceived gullibility of poorly-educated Japanese guards, such as obtaining petrol from stores for use in a steam-powered road roller, then trading the petrol on the black market for food. They also managed to sabotage a Japanese war memorial by seeding the timber flagpole with termites.

Des had carried small sketch books with him, and recorded aspects of the voyage out, the actions in Malaya and Singapore, in various media including pencil, ink, water colour and pastel. He continued his artistic endeavours during his new life as a P.O.W. As well as documentary sketches, he kept spirits up by producing a series of cartoons, some of which satirised his captors. He also became part of a ‘production line’ producing programmes for the many theatrical and musical entertainments which were produced during the years of captivity, as well as assisting with designing and building theatrical sets for plays, Christmas revues and pantomimes. Des met Murray Griffin (Australian war artist) and Ronald Searle, who both continued to produce works of art undercover and sometimes with primitive materials. Paints were manufactured from coloured earth from various depths, sometimes as deep as 12 metres. Colours ranged from white, ochre and brown to Indian red. These were dried, ground with bottles and mixed with rice water, and worked very well. Sets for theatre productions were old tents, made into flats and backdrops. Wood was scrounged or stolen and ingenious uses were made of old army lockers and equipment.

In contrast to much of the POW art which survives from this period, Des’s work finds uplifting humour in the day-to-day existence of the POW. There are serious works documenting incidents which occurred during the various campaigns, but the spirit of much of the work is one of light-heartedness, helping Des to keep a sense of optimism in the face of a brutal captor. There are also touching works of nostalgia.

Not all of his POW art survived the war. A sketch book of political cartoons, drawn at a time when the war was going badly for Germany and Japan, was discovered by Japanese guards in the possession of a fellow POW to whom Des had lent the book. Des was required to explain this work, via interpreters, to the Japanese commandant and various senior officers, and was lucky, in his words, not to have been given ‘a short haircut’ in punishment.

Des’s survival of the years of incarceration was in no small part due to his not being sent to work on the notorious Burma railway, which claimed the lives of some 16,000 allied POWs and a much greater number of forced labour Asian workers. Des was repatriated to England on the  RMS Maloja  and arrived home in late September 1945 to find that his only brother had perished when his submarine the HMS ‘Vandal’ sank off Scotland while on trials, with the loss of all crew. It was finally discovered in 1994 and designated an official war grave.

Des studied art in Leeds and was appointed to the South Shields School of Art in the north-east of England, eventually becoming Acting Principal, as well as teaching night classes at a local secondary school.

He had married Irene Kay in 1946, and, disillusioned by the way politics was affecting art education in England, emigrated to Australia in 1958 with Irene and his three children. One wonders what influence his fellow Aussie POWs with their carefree attitude, may have had on Des making this decision to move to Australia. Arriving from an English winter to a very hot South Australia in February, his first art teaching post was at the technical high school in Whyalla, on the edge of the desert. After several months he was transferred to the South Australian School of Art in Adelaide, rising to the position of Assistant Principal and finally Acting Principal before retiring in 1974.

During his years as an educator he continued his passion for art, experimenting in various media in his home studio, and even after retirement continued to teach art to a local church group. He also indulged his interest in music, forming a successful harmonica trio (the Des Bettany Trio) which appeared regularly on national television and at many live music venues, and also produced an LP record.

He seldom spoke about his wartime experiences. His children were aware of the album of sketches, and an envelope full of theatre programmes, which he kept in his wardrobe, but it was only in 1995, on the 50th anniversary of the end of the war, that he spoke in more detail about his life as an artilleryman and a POW, having re-met two colleagues from the 88th Field Regiment living in Australia, and rediscovered a series of lost artworks which went missing at the end of the war. At this time he was also asked if some of his artwork could be published in a book commemorating 50 years since end world war 2 ‘Their Sacrifice: Australia Remembers 1945 – 1995’, by Rob Linn. Later, in 1999, some of his work appeared in a regimental history by Dr. Stephen Bull ‘Lancashire Gunners at War: The 88th Field Regiment, 1939 – 1945’ 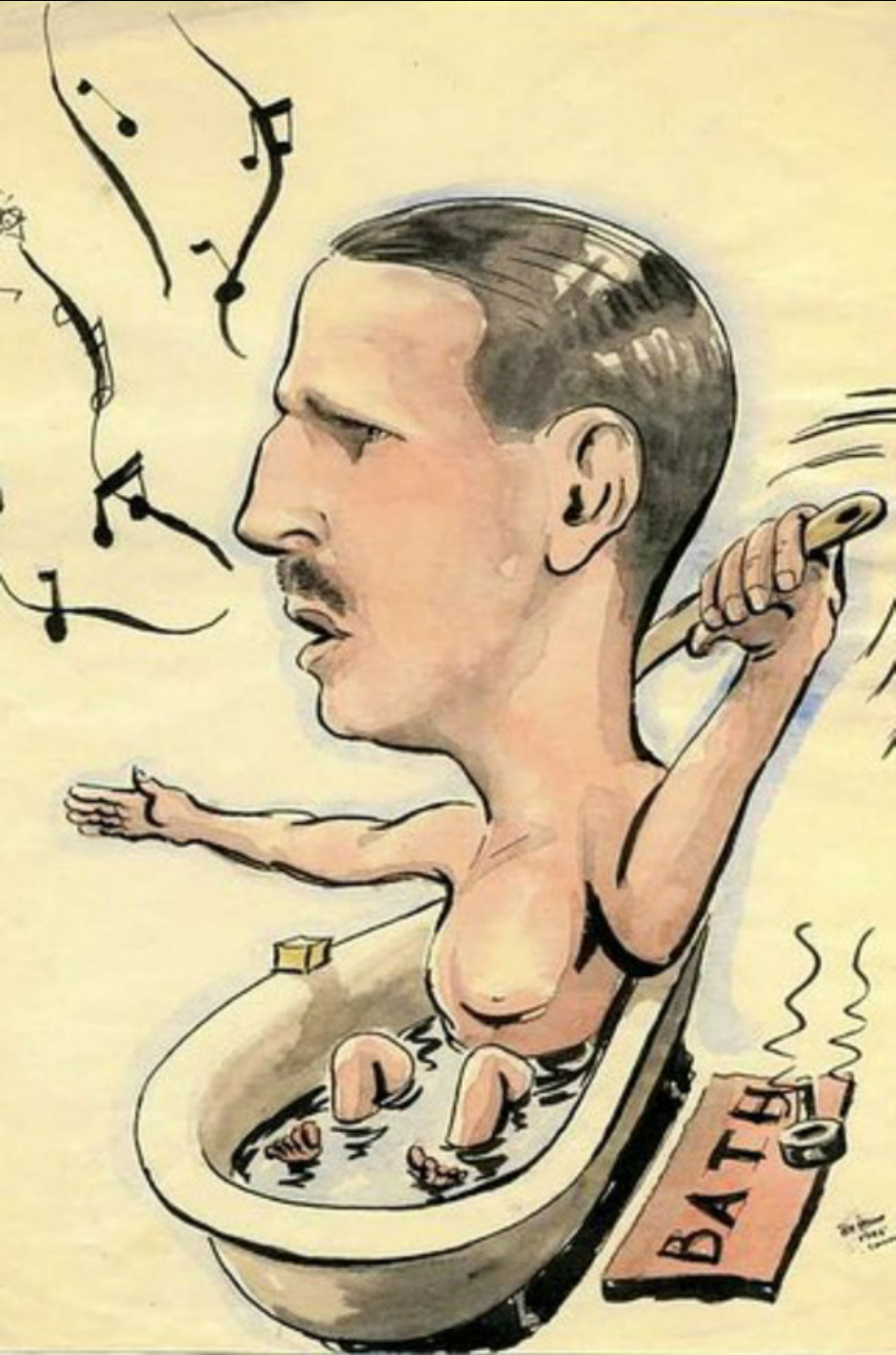 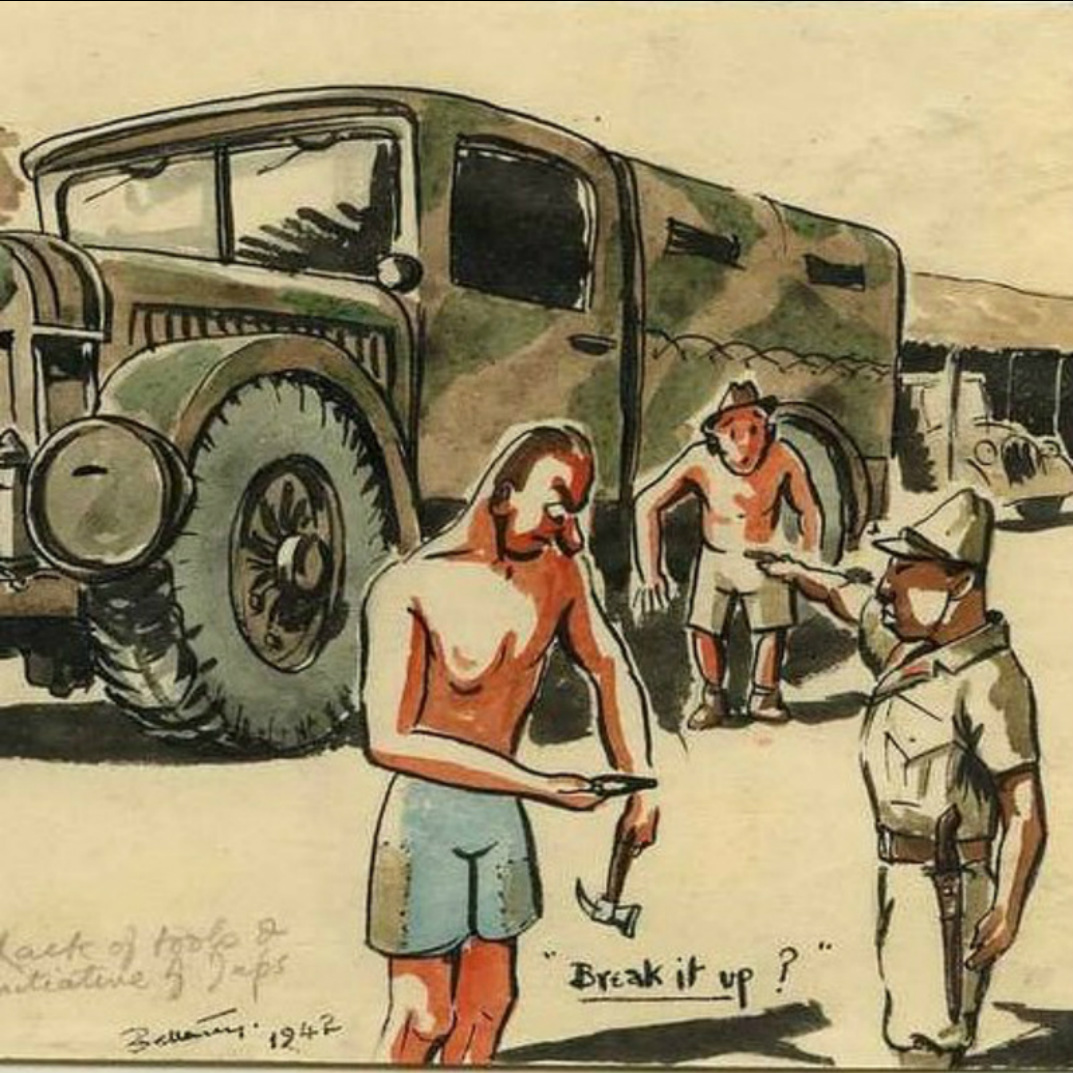 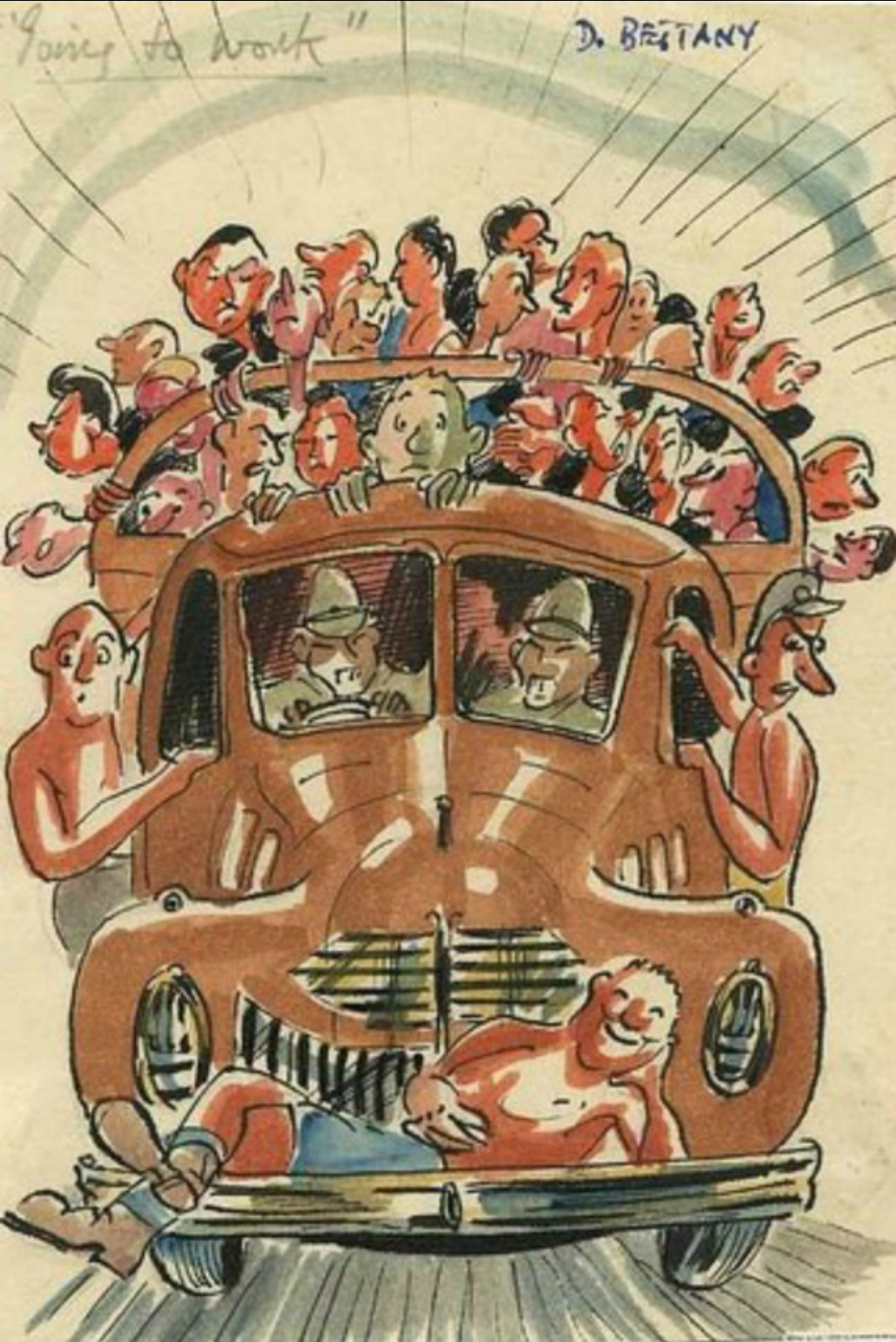 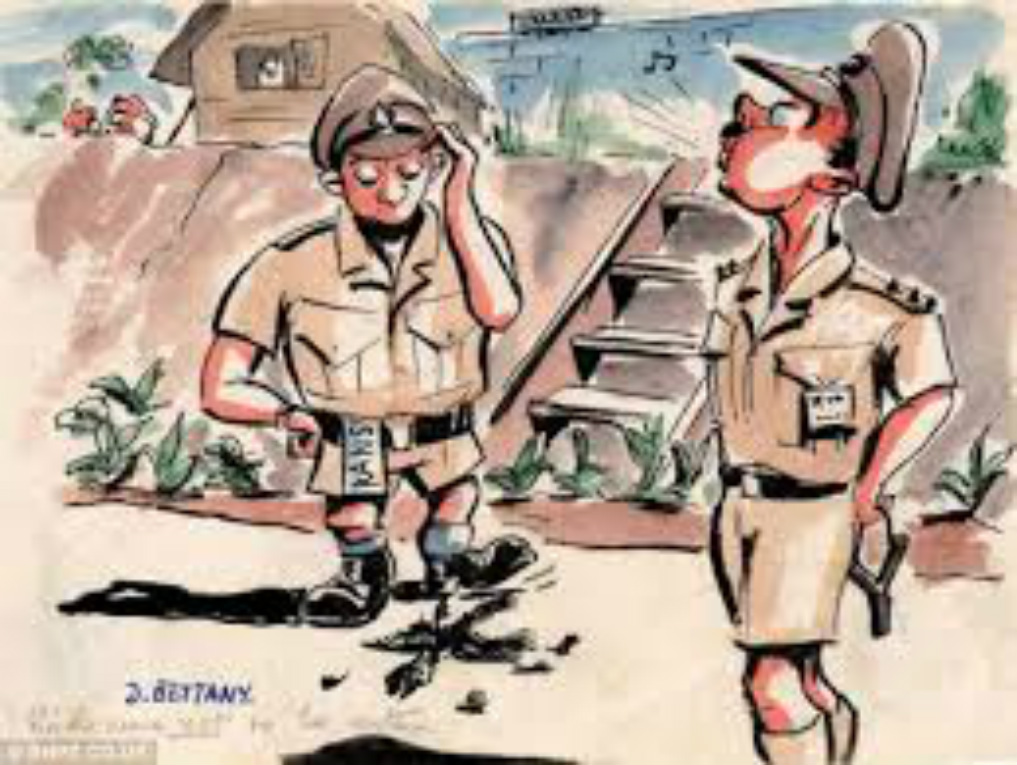 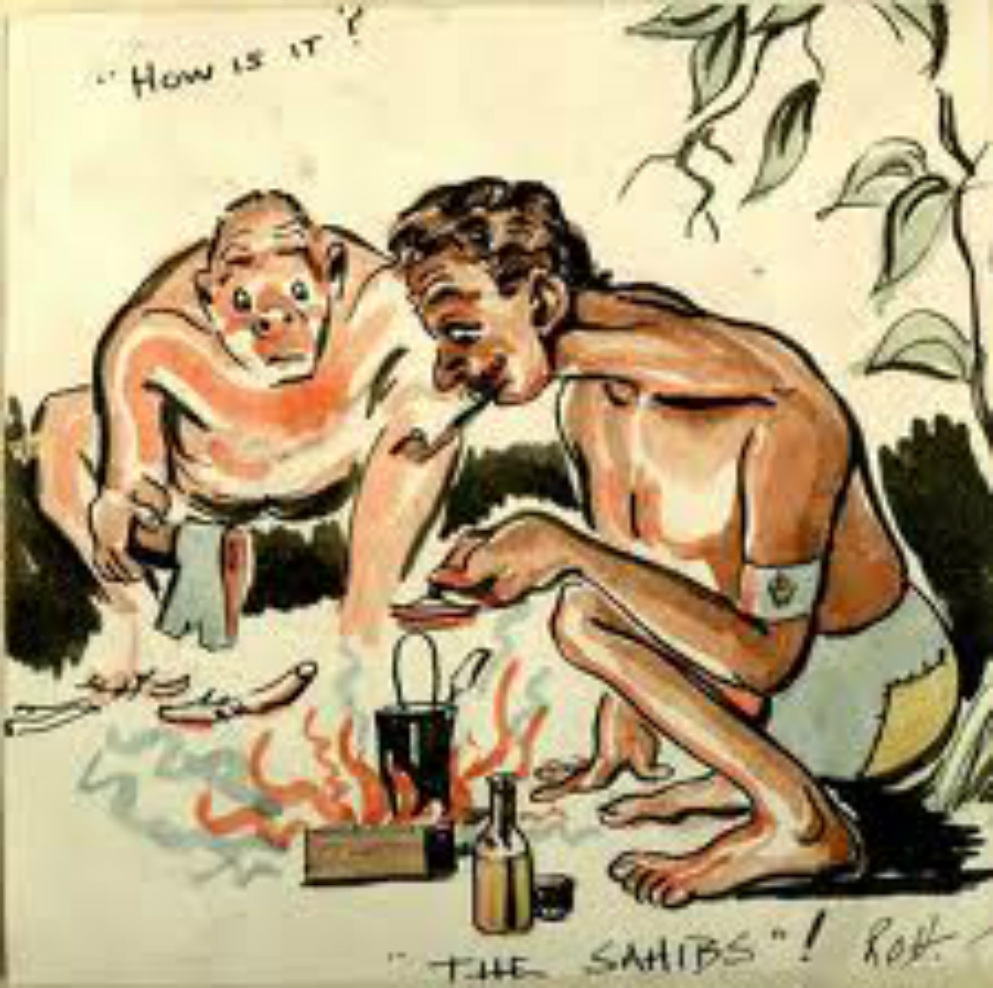 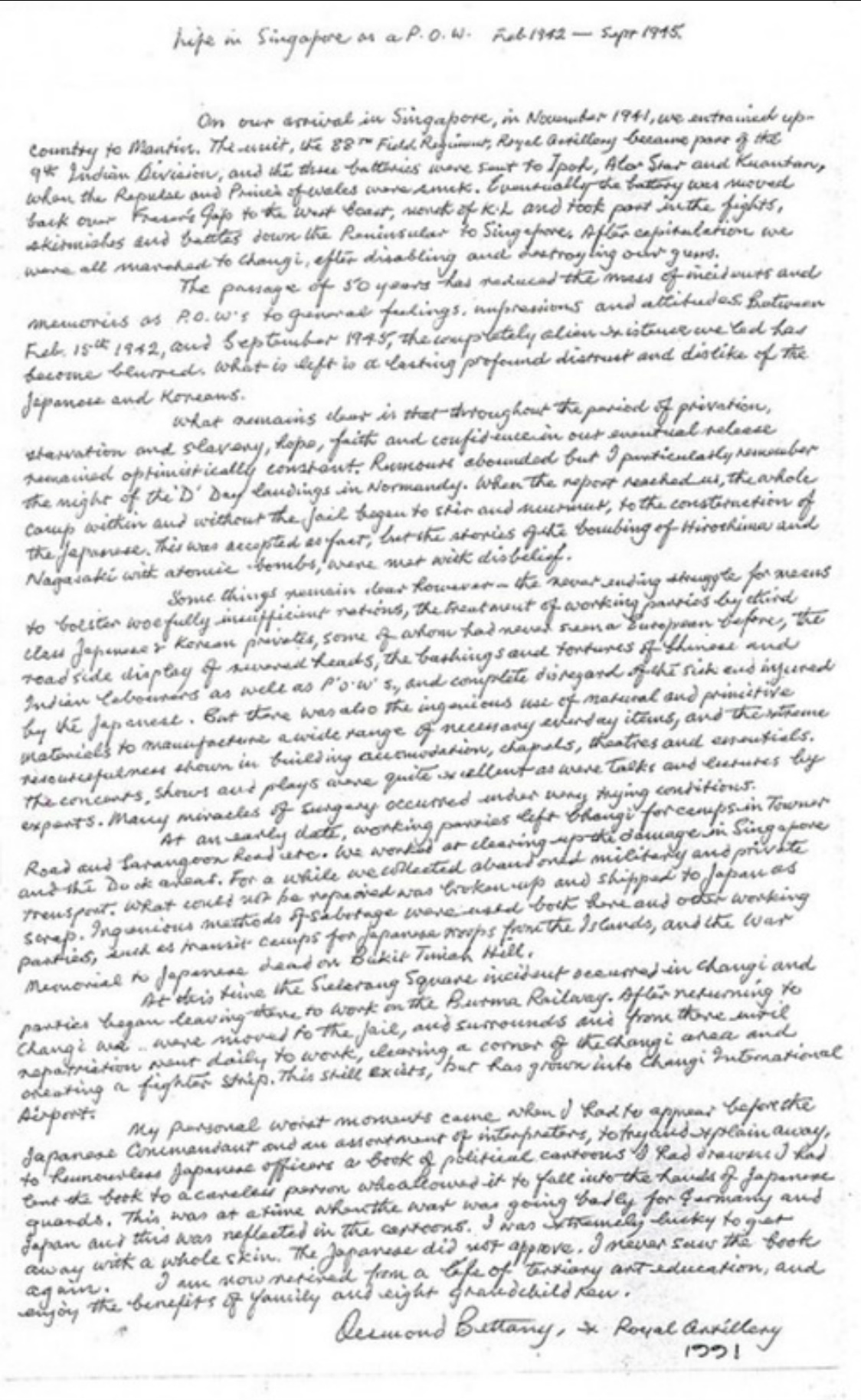 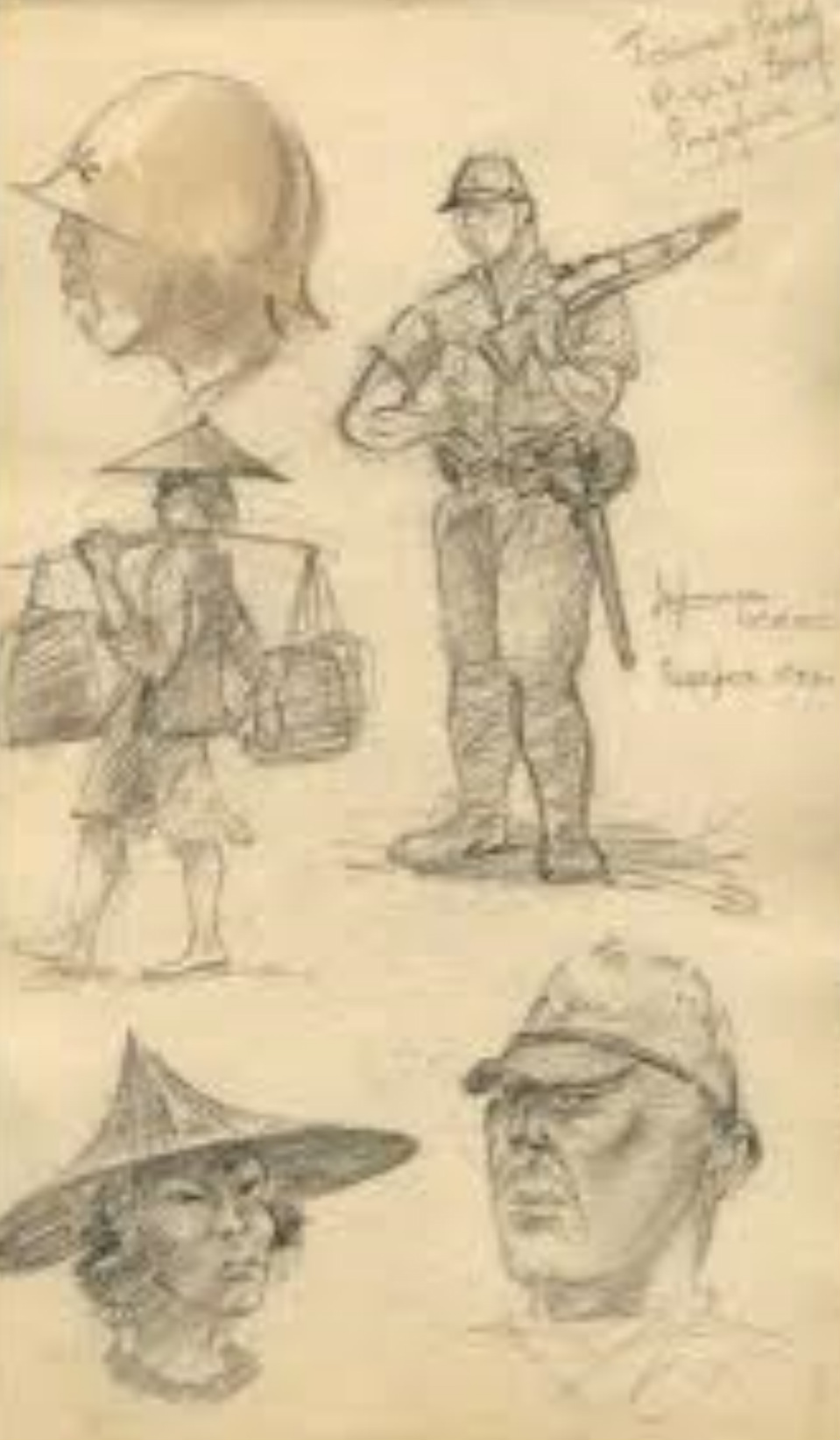 1946-1948 JAPAN. A carefully selected handful of Japanese war criminals is put on trial by the victorious Allies in Tokyo and elsewhere 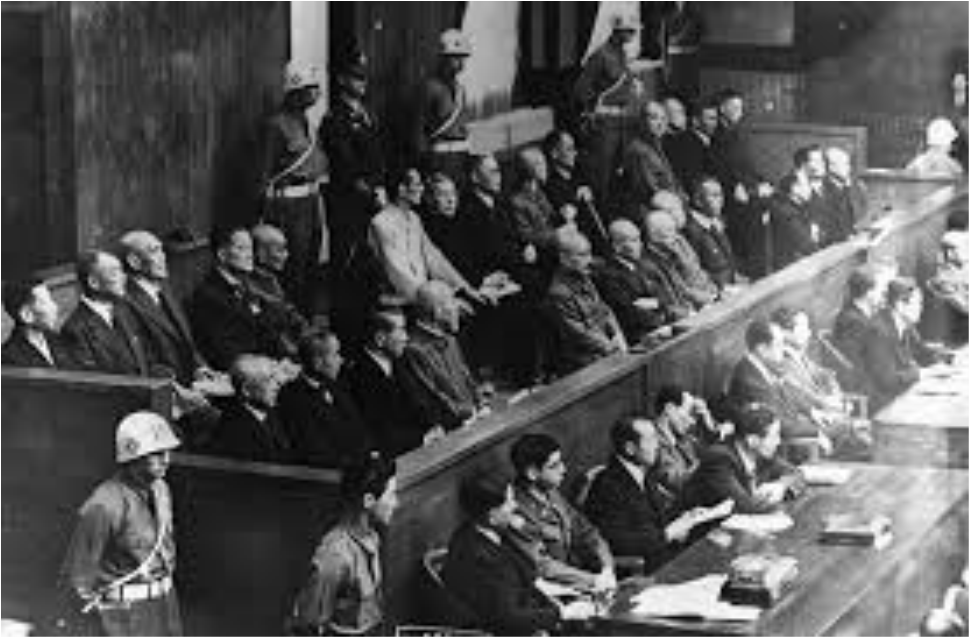 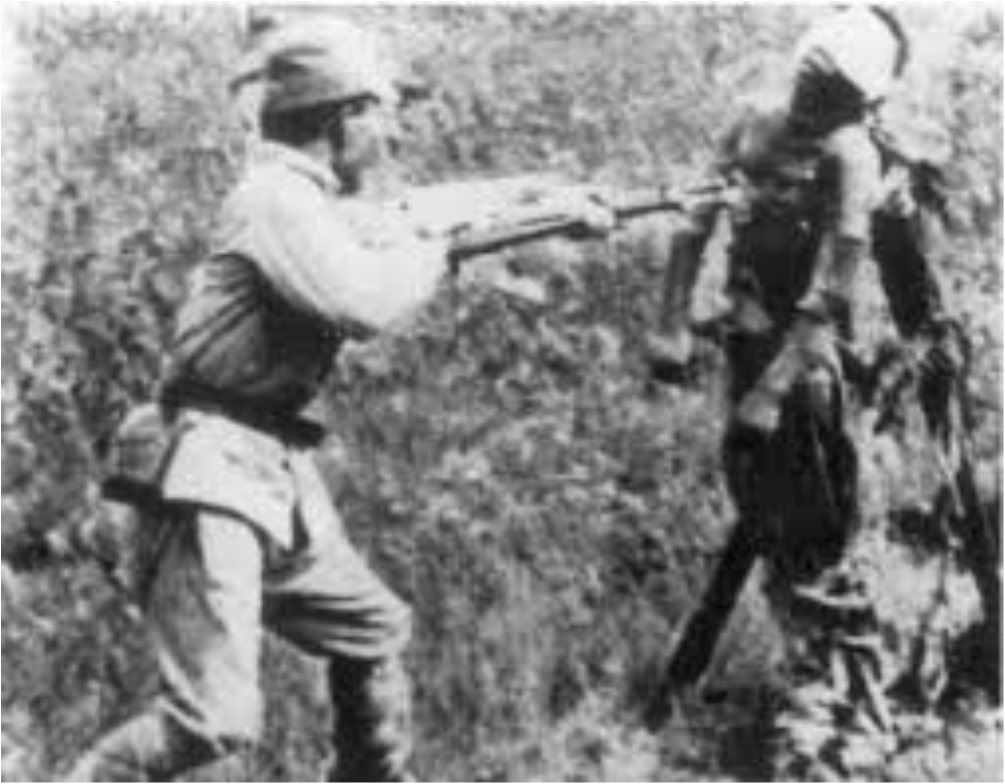 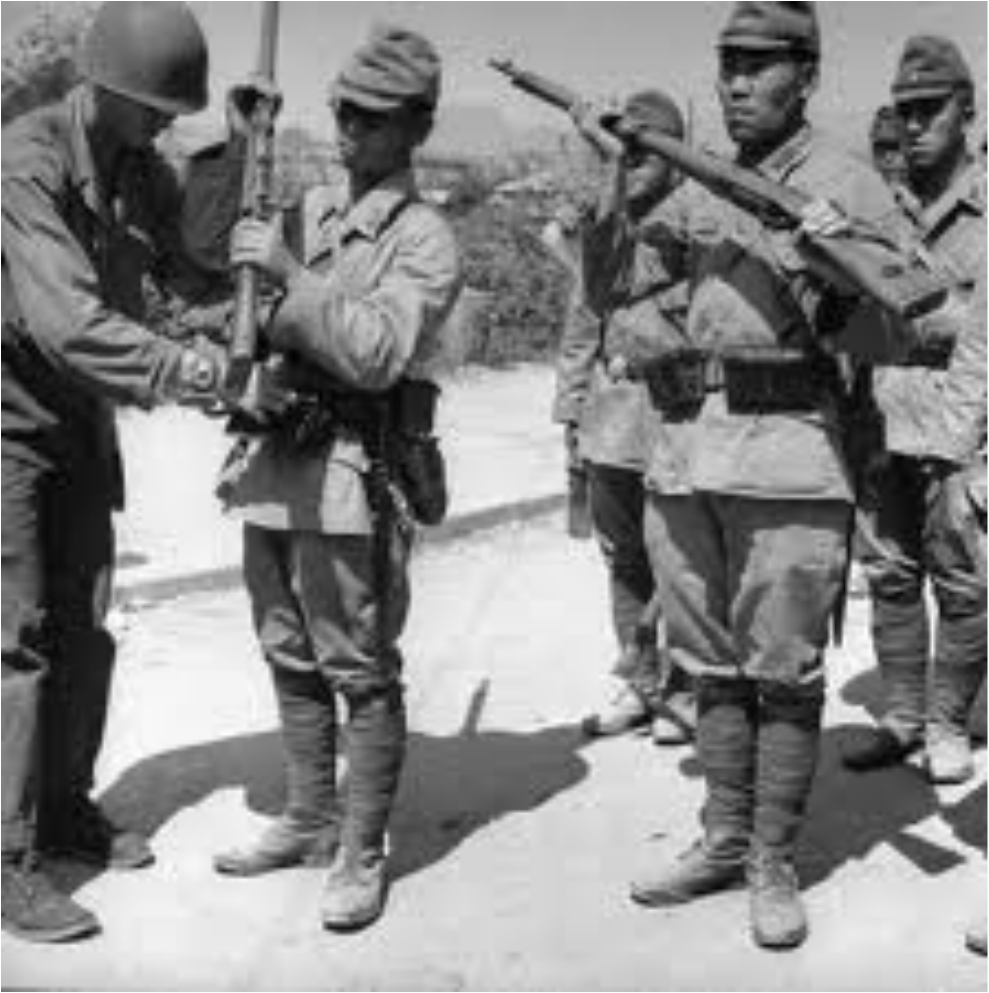 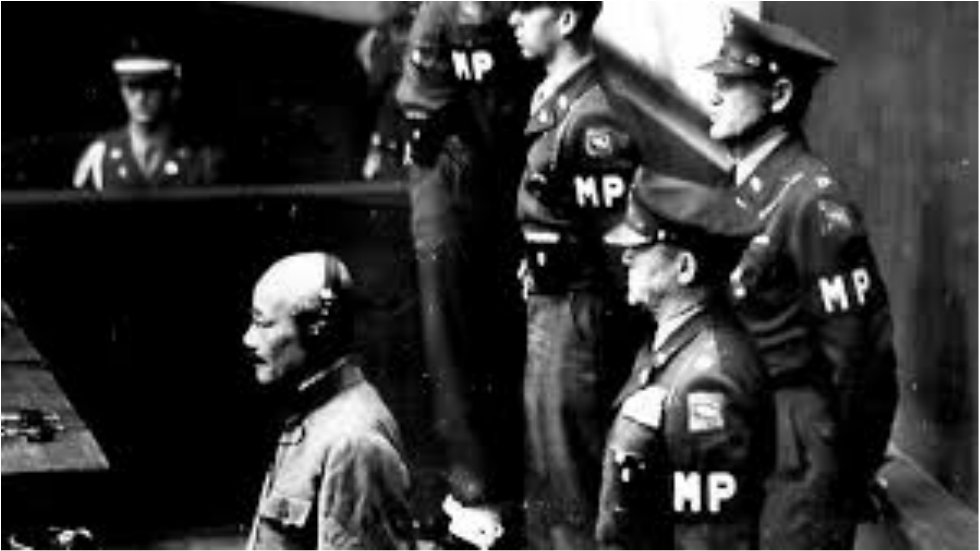 Former Japanese prime minister and war leader Hideki Tojo is sentenced to death at the International Military Tribunal in Tokyo in 1948. 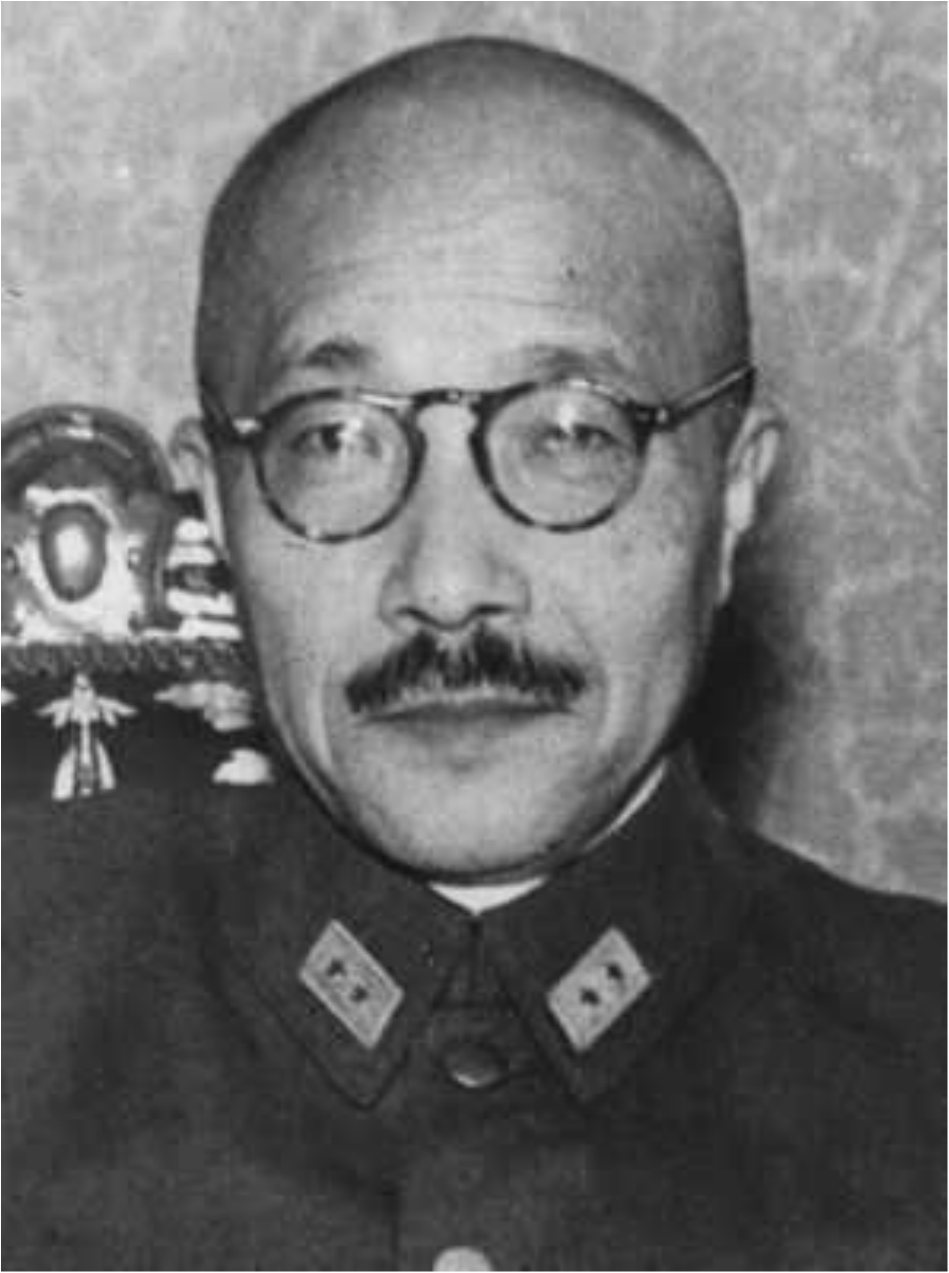 Hirohito was the leaderemperor of Japan during World War 2. During World War 2 ostensibly under Hirohit's leadership, Japan formed alliances with Nazi Germany and Fascist Italy, forming the Axis Powers. Hideki Tōjō was the Prime Minister of Japan from 18 October 1941 to 22 July 1944, and played a major role in Japanese politics during World War II. Tōjō too faced accusations of war crimes 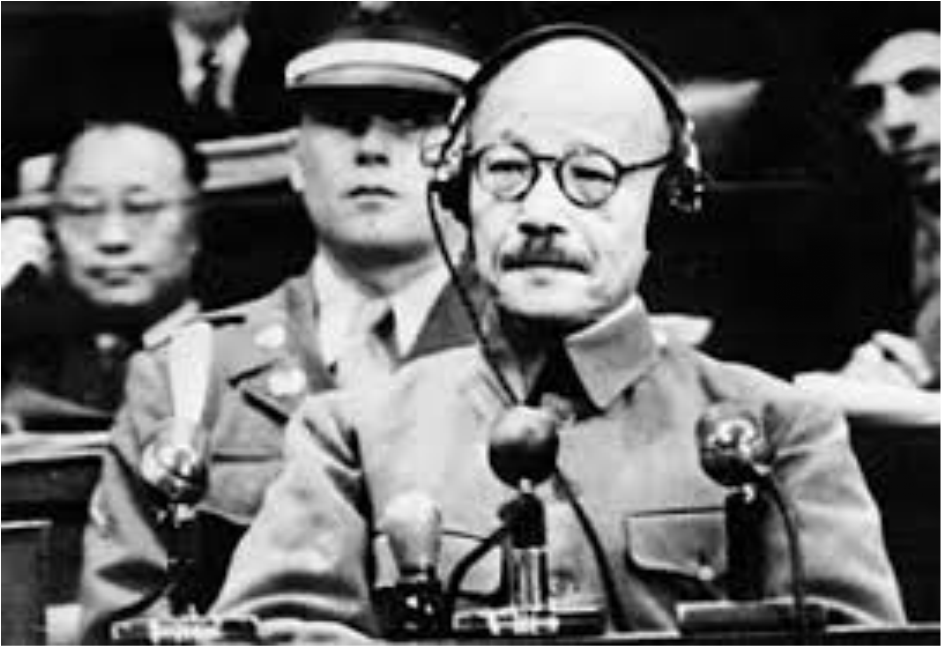 Hideki Tojo, who was hanged as a war criminal in 1948, wanted to fight on after the atomic bombings in Japan, believing surrender was a disgrace 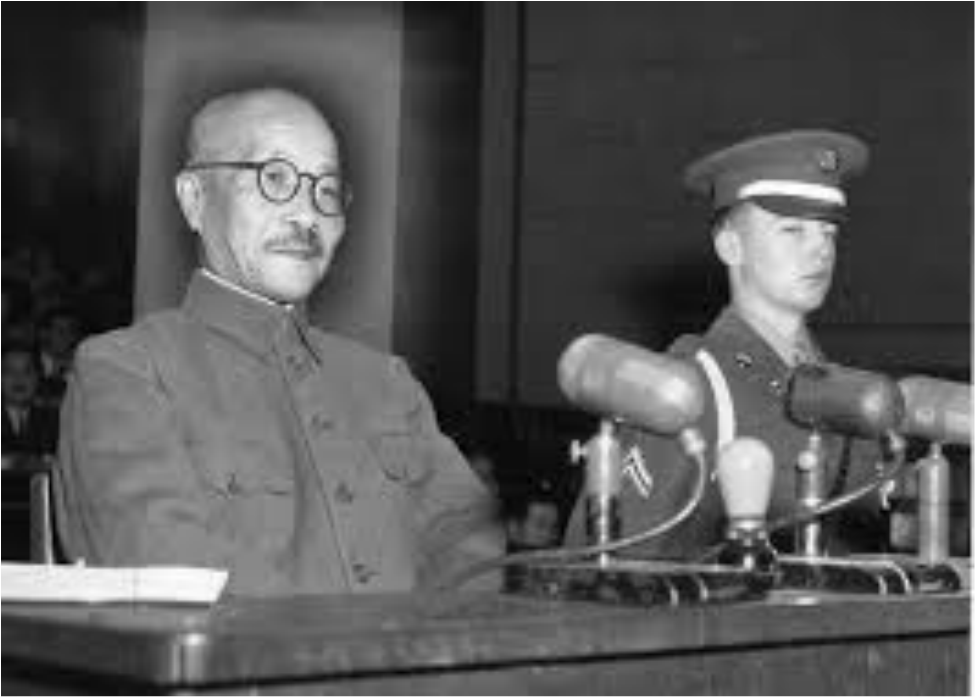 General Hideki Tojo taking the stand for the first time during the Tokyo Trials in Japan on Dec. 26, 1947. Tojo was executed for war crimes in 1948 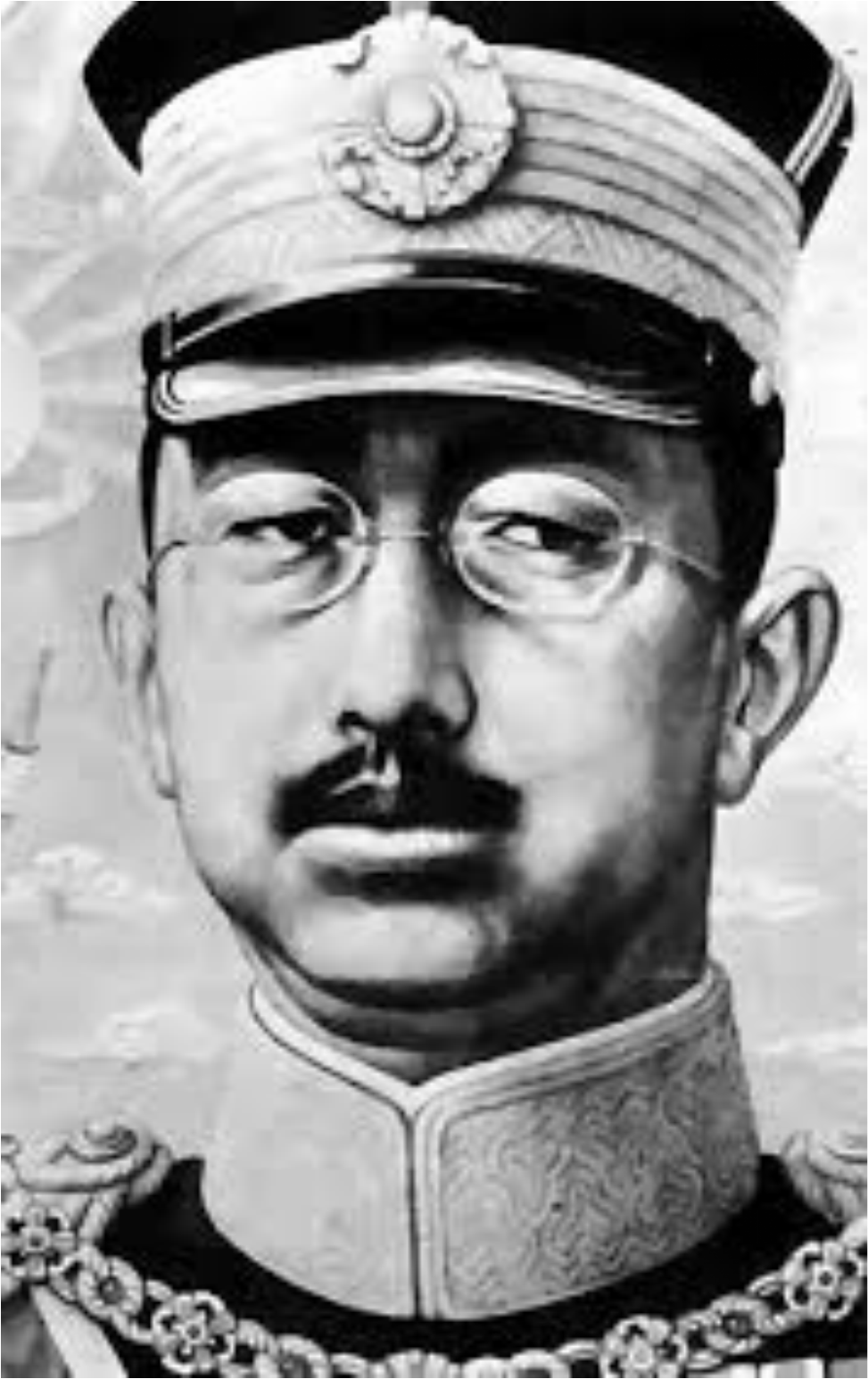 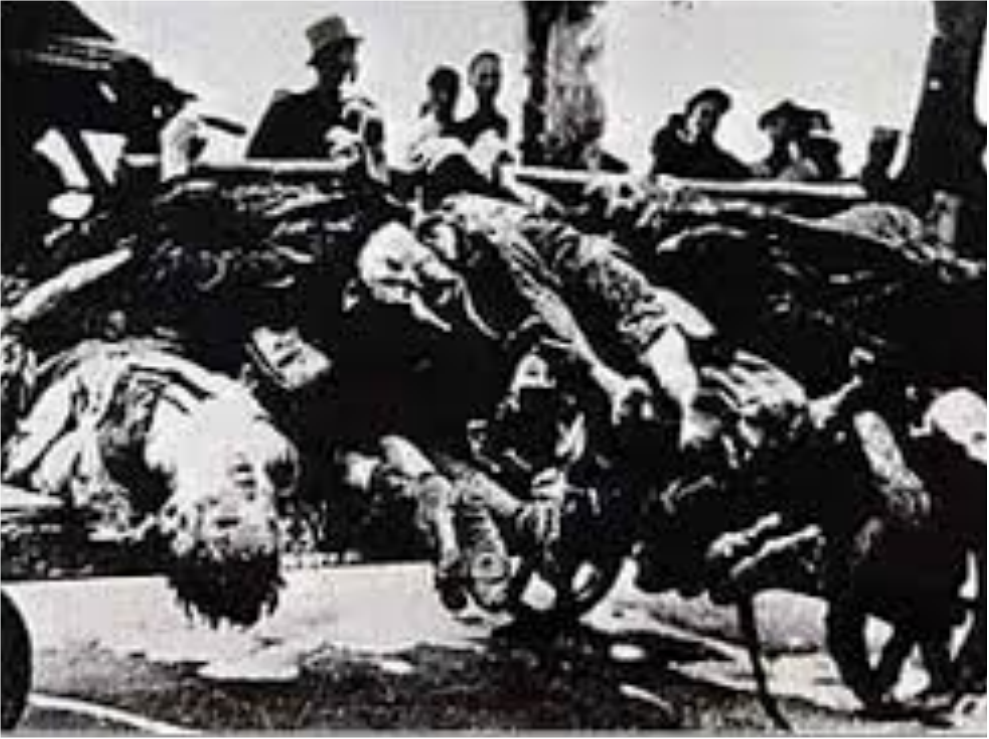 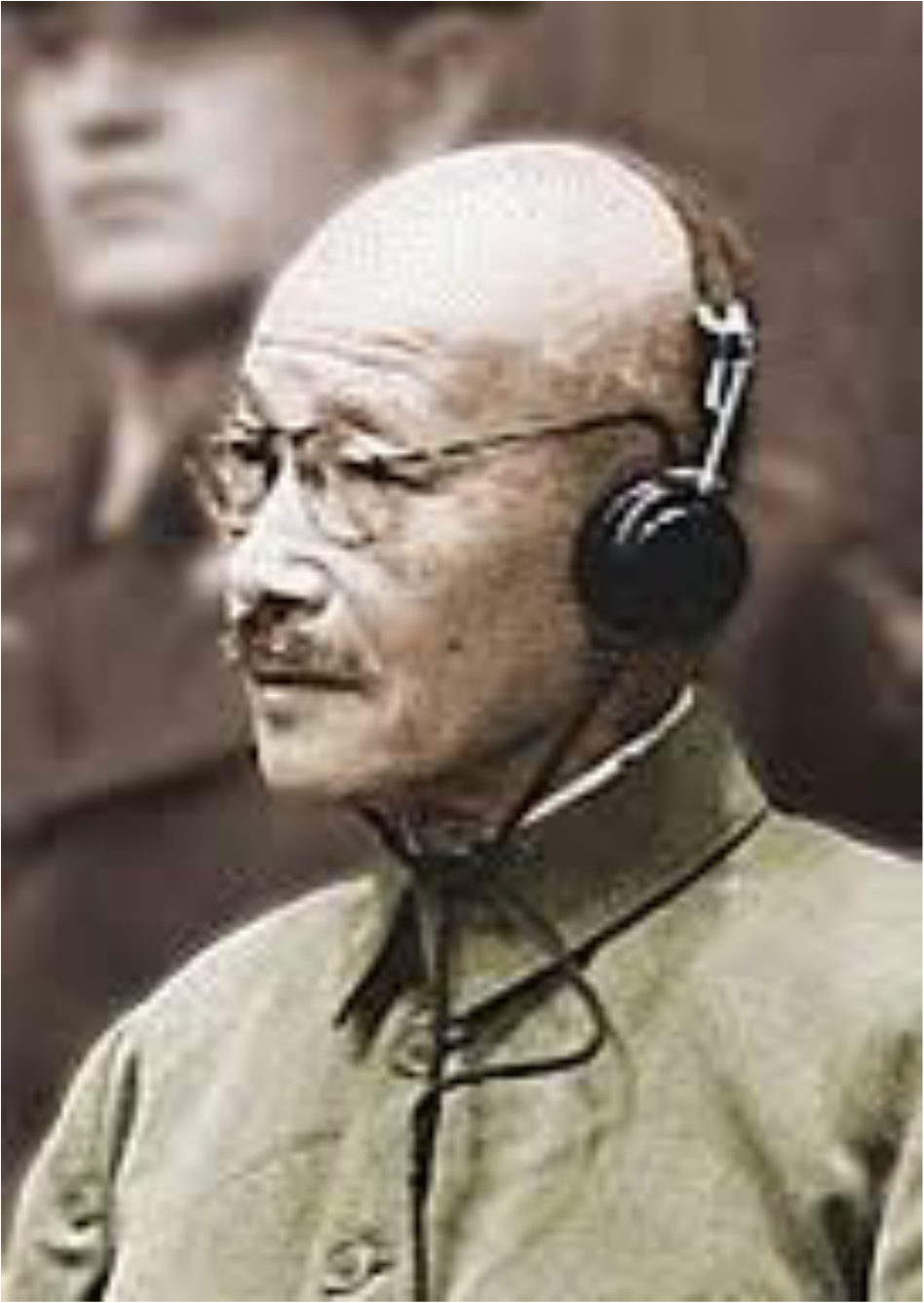 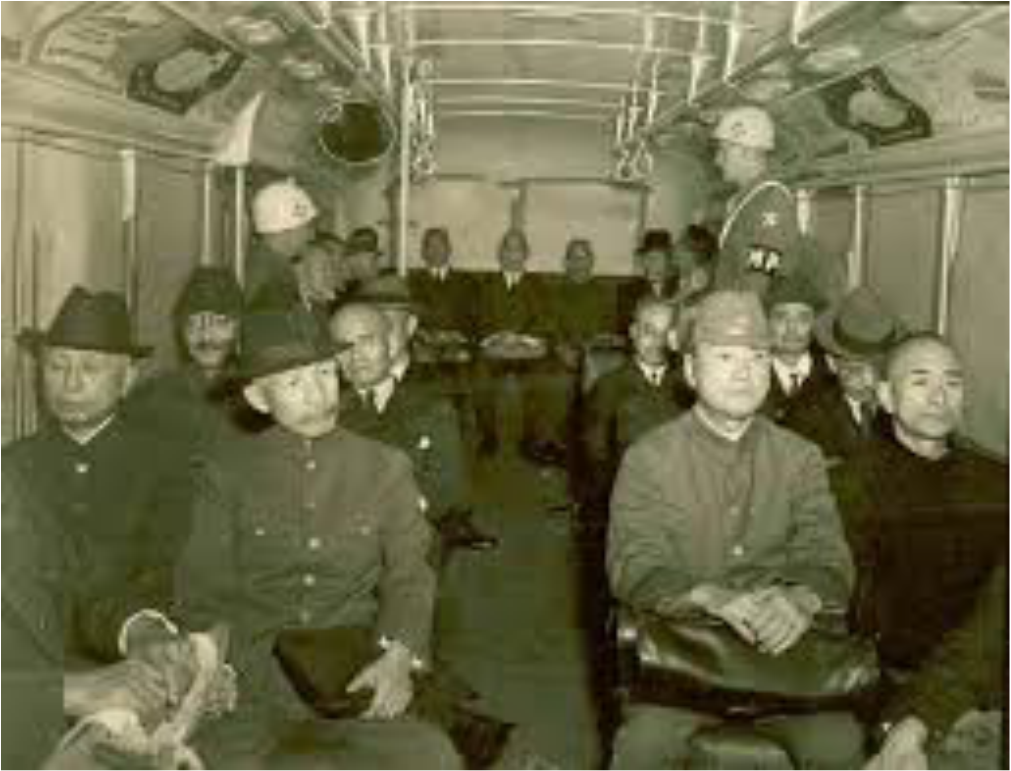 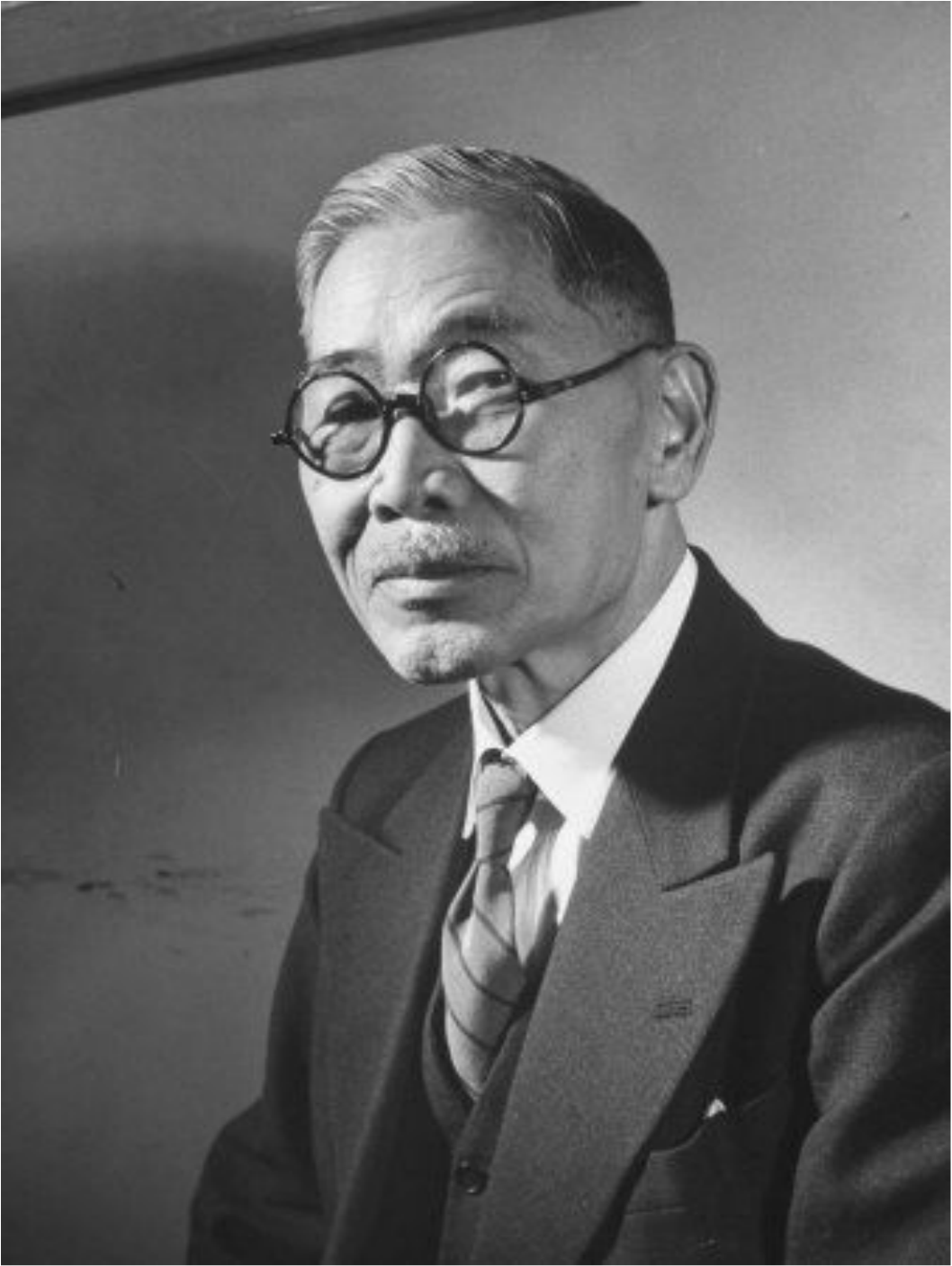 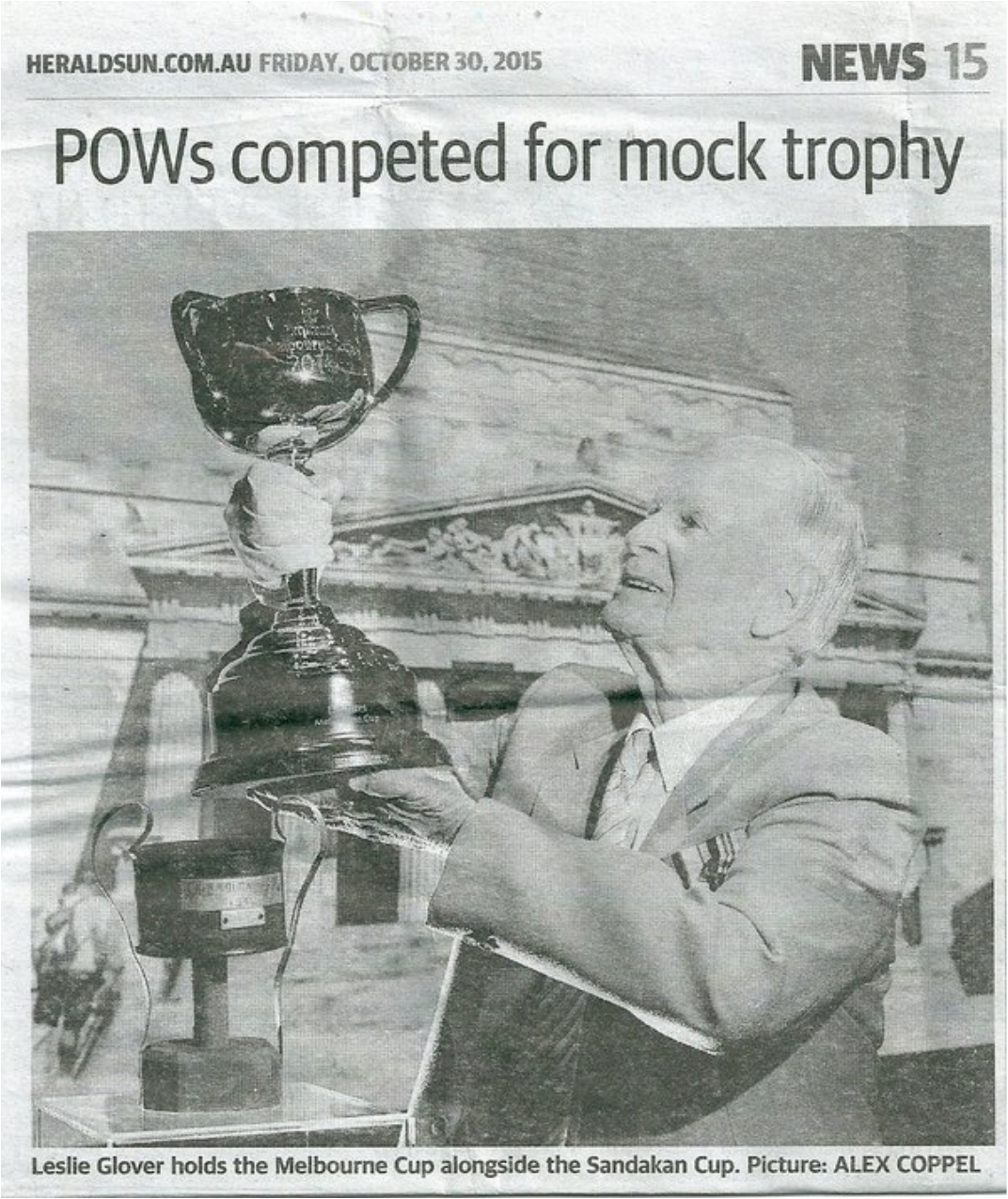 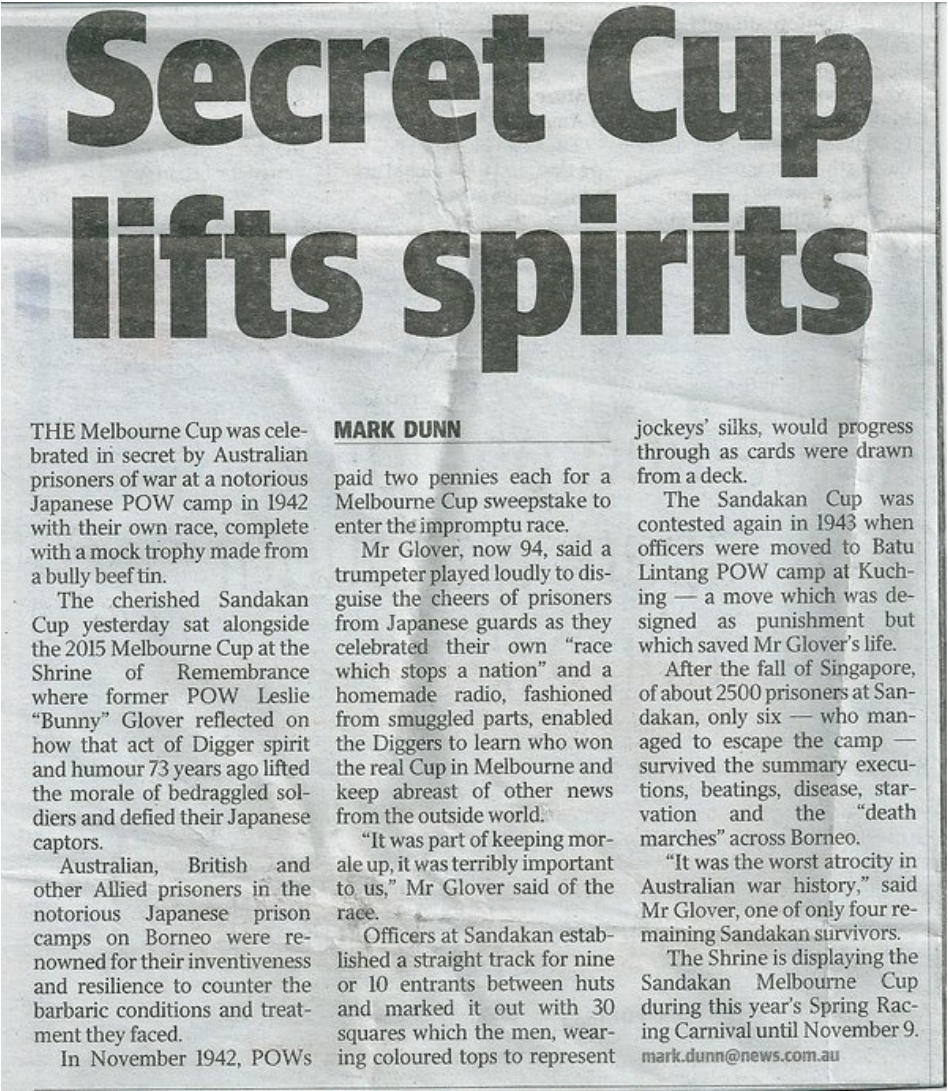