The Evacuation of Crete in World War Two.
The Greek campaign, in which Australian, British and New Zealand troops, under the command of the British general, Sir Henry Maitland Wilson, supported Greek forces against the Axis powers, was an ill-planned, disastrous and short campaign. It resulted from Britain's earlier guarantee to support Greece if it were attacked without provocation.
The Greeks, assisted by British forces, had defeated an Italian invasion in October 1940. On 6 April 1941, German forces attacked Greece and Yugoslavia simultaneously. British Prime Minister Winston Churchill was unable to secure support from Turkey for an Allied Balkan front; furthermore, the Australian and New Zealand governments, who provided most of the troops, were not privy to the planning of the operation. Prime Minister Robert Menzies was uneasy about the operation and sought unsuccessfully to have it reassessed.
From the outset, the Allied forces were vastly outnumbered. Some 58,000 men, including two thirds of the Australian 6th Division, were transported from Africa and, together with the Greek Army, faced two German armies: the 12th, consisting of 13 divisions, and the 2nd, with 15 divisions, and including four armoured divisions in each. The campaign was hindered by poor communications between the Greek and British commanders, the primitive road and rail system in Greece, the difficult terrain, and the speed and success of the German advance. On the first day, the Germans made a devastating air attack on Piraeus; the Allies lost the initiative and never regained it. Yugoslavia capitulated quickly, cutting the Greek supply route to its forces on the Italian front. Within a week, General Wilson's forces were in retreat.
Lieutenant General John Coates has summed up the campaign thus:
Yet, as in almost every Allied campaign in the early part of the war, the worst mistakes of the politicians and strategists were moderated by the bravery, fighting qualities and sheer dogged determination of the troops. Greece was no exception.
Australian and New Zealand troops (predesignated the ANZAC Corps) undertook some very successful local fighting but withdrawal was soon inevitable. The occupation of historic Thermopylae Pass by Vasey's 19th Brigade was merely a respite in the retreat down to Athens. The evacuation began on 24 April and over 50,000 troops were removed over five successive nights. A number of small, isolated groups and individual Allied soldiers who had been cut off from the retreat were left behind in Greece. Many of these escaped largely owing to the bravery of the Greek people who assisted them.
Over 26,000 weary Allied troops landed on Crete in the last week of April 1941. They remained on the island for less than a month. In a brief, savage campaign, the Australians inflicted heavy losses on the German paratroopers. One German battalion lost more than two-thirds of its men. Another rearguard action by the 2/7th Battalion, AIF, and the New Zealand Maori battalion left 280 German dead and allowed the retreating forces to reach the evacuation point in Suda Bay. HMAS Perth was hit while carrying members of the AIF back to Egypt. The British admiral in charge of evacuation called it "a disastrous period in our naval history".
Although 15,000 men were evacuated by ships of the Royal Navy and the Royal Australian Navy, some 12,000 Allied troops, including 3,000 Australians, were left on Crete and most became prisoners of war of the Germans. As in Greece, some made daring escapes. Many were sheltered by the people of Crete. The war cemetery at Suda contains the graves of 139 men of the AIF and the RAAF.
The Greek campaign remains controversial. It did not succeed in its primary object to assist the effective defence of Greece, and the Australians and New Zealanders sustained heavy losses. Afterwards, both the 6th Australian and the 2nd New Zealand Divisions had to be rebuilt. 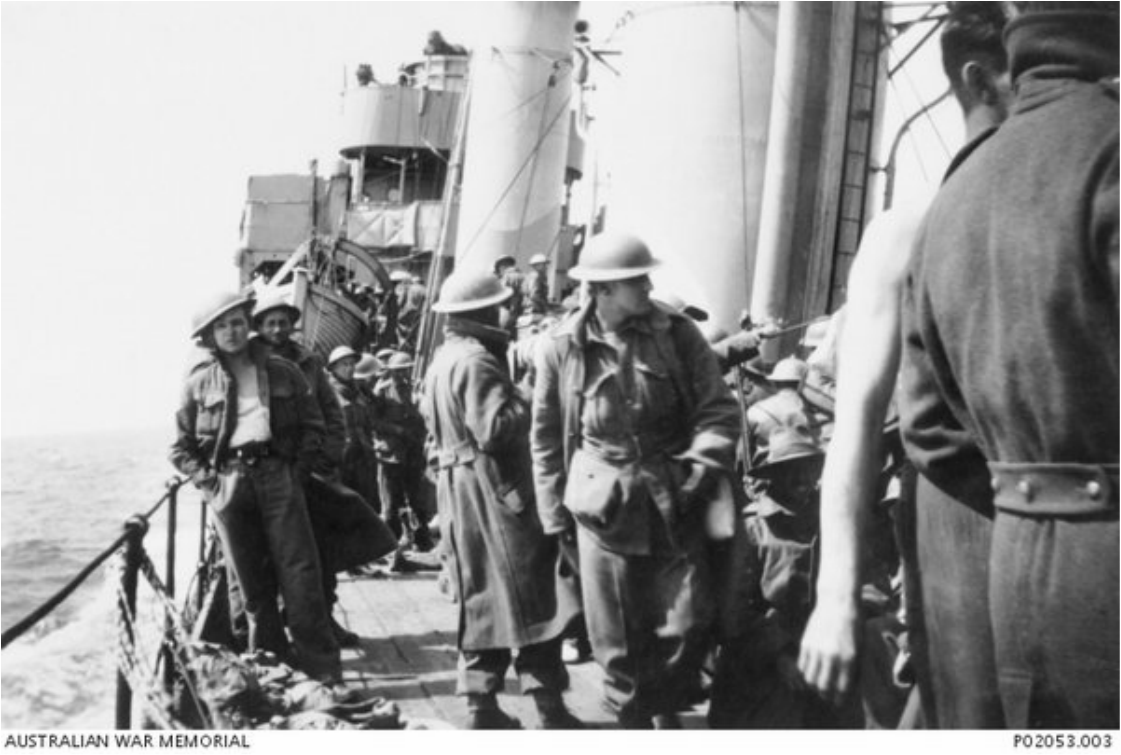 WW2 Members of the 6th Division Signals stand on deck of Destroyer HMS Wryneck on the way from Greece to Crete. 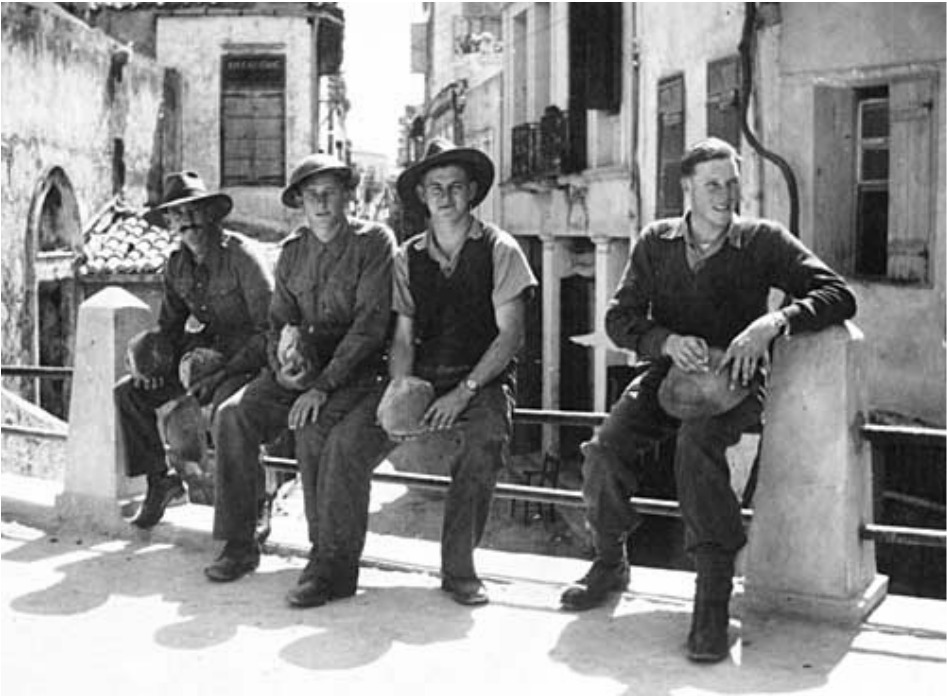 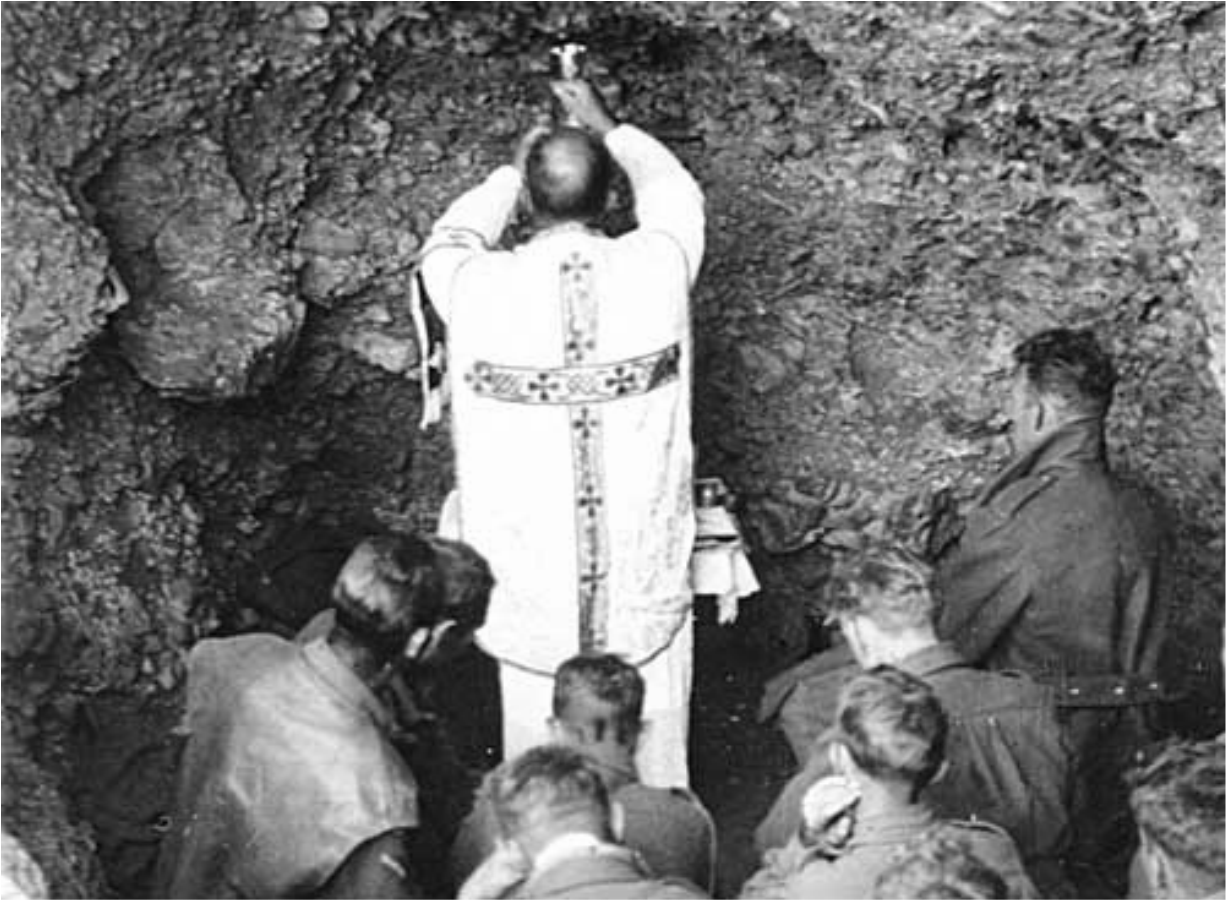 World War 2 - A priest conducting a Roman Catholic church service in a cave in Crete, May 1941 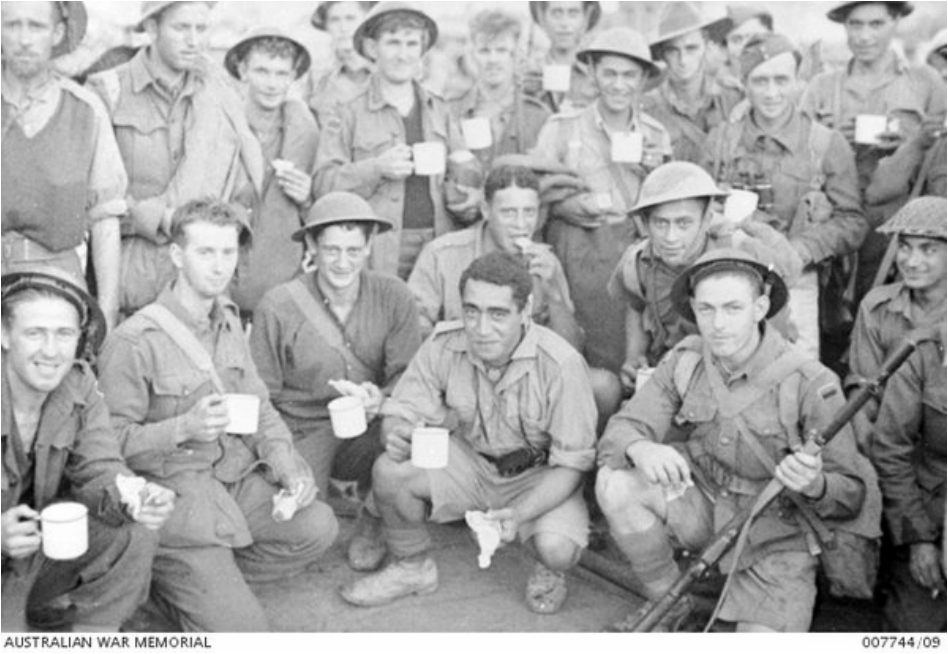 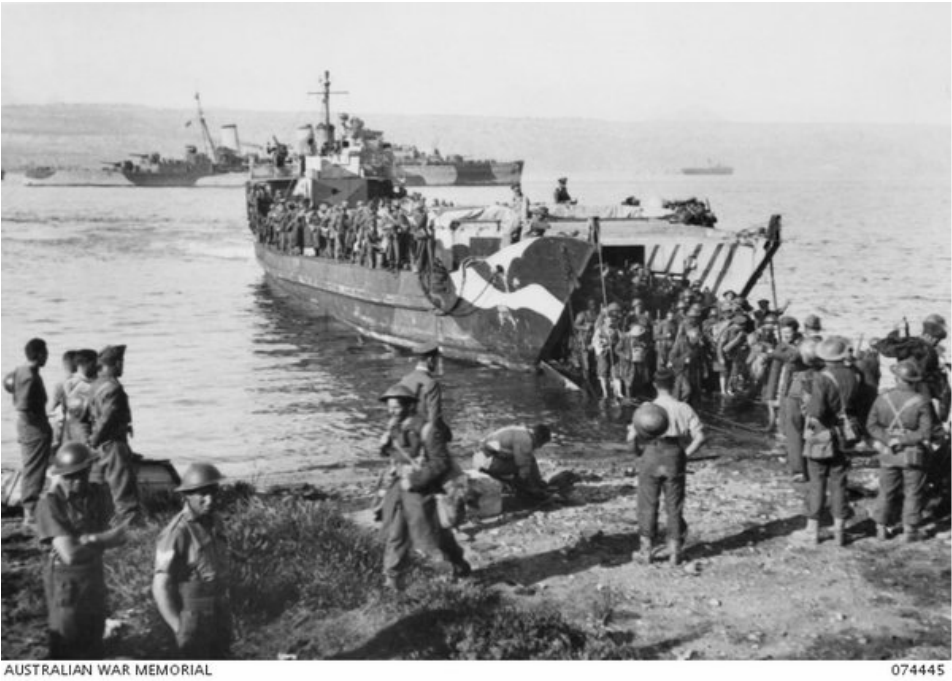 Suda Bay Crete, May 1941. 6th Division Troops Landing After Their Evacuation From Greece 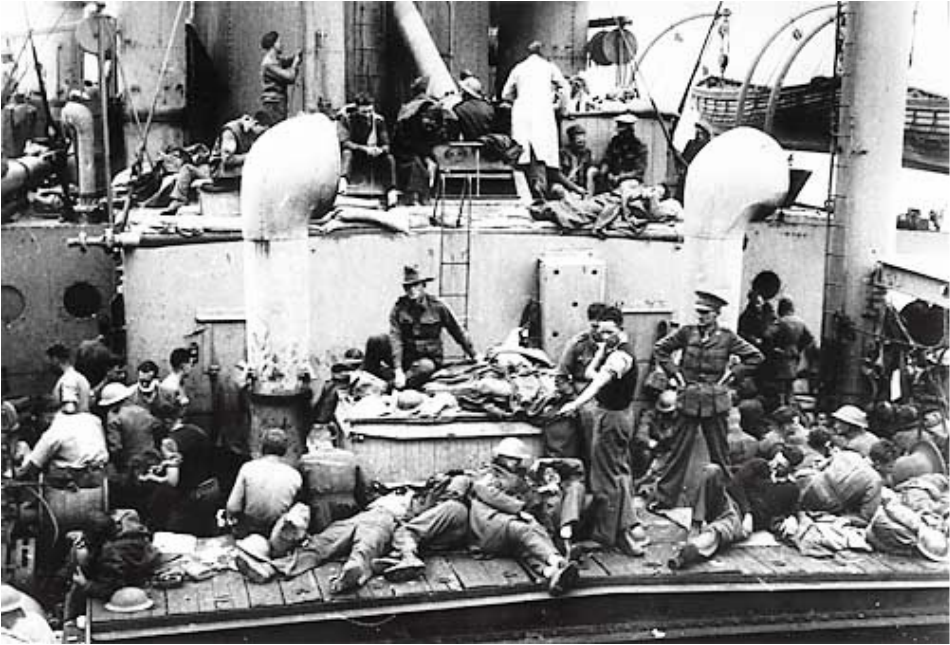 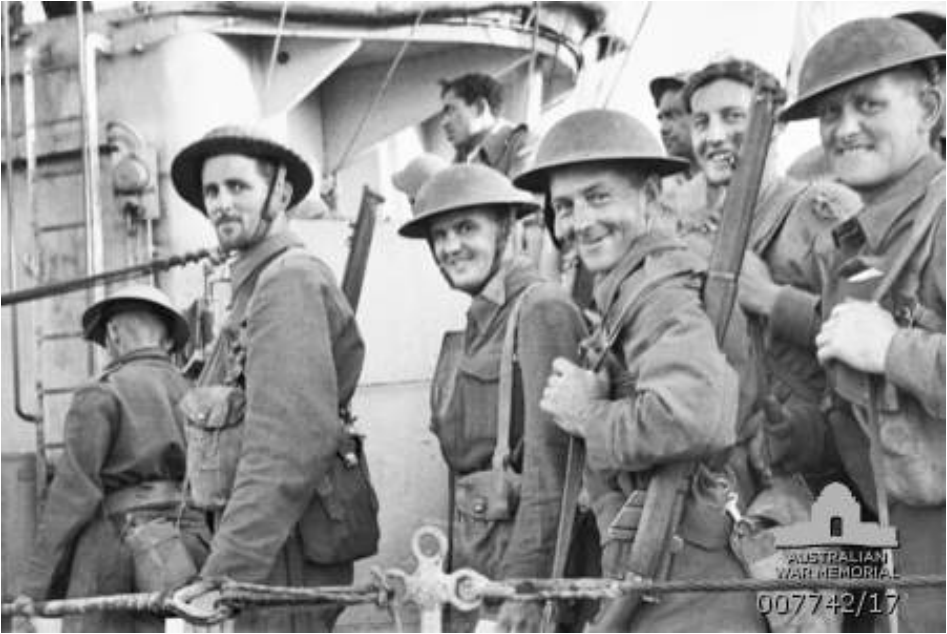 World War 2 - A smiling group of soldiers from 6th Division who had been in the fighting on Crete disembark at Alexandria. 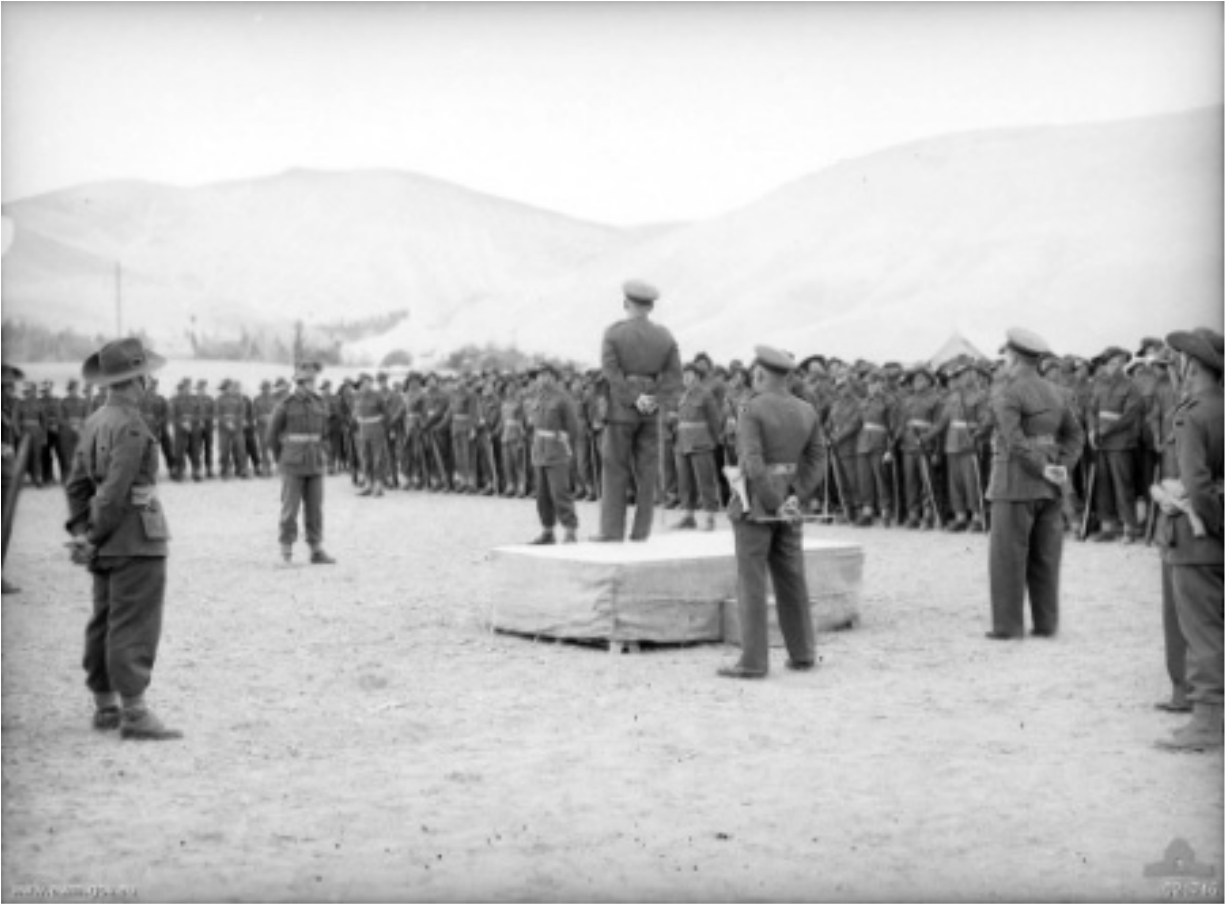 2/5th Battalion. A military officer on a podium delivers a speech to gathered troops 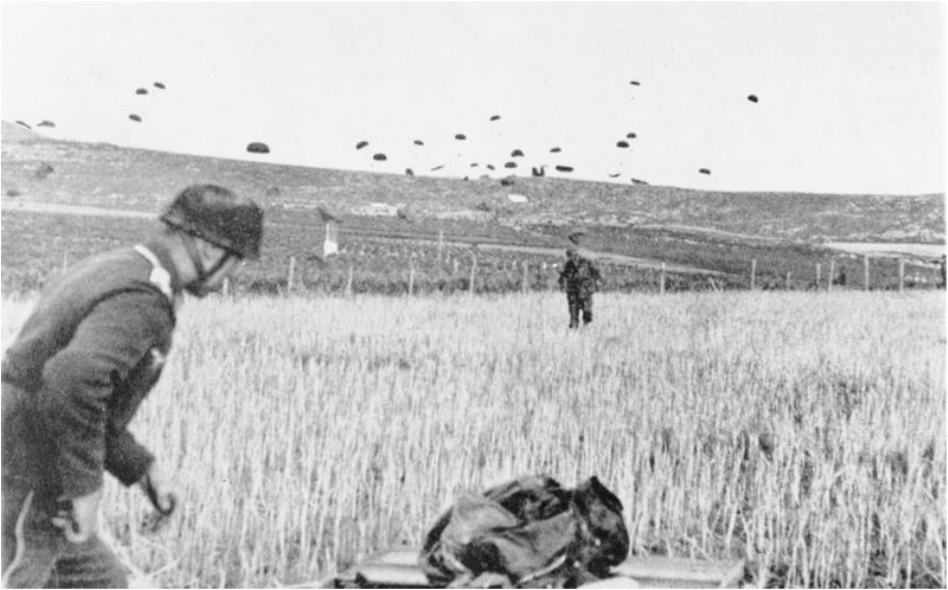 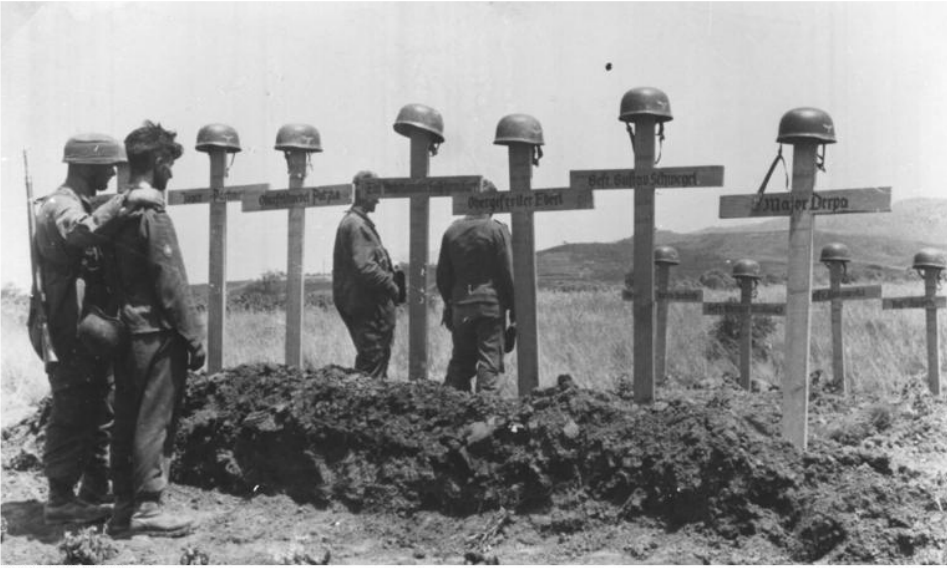 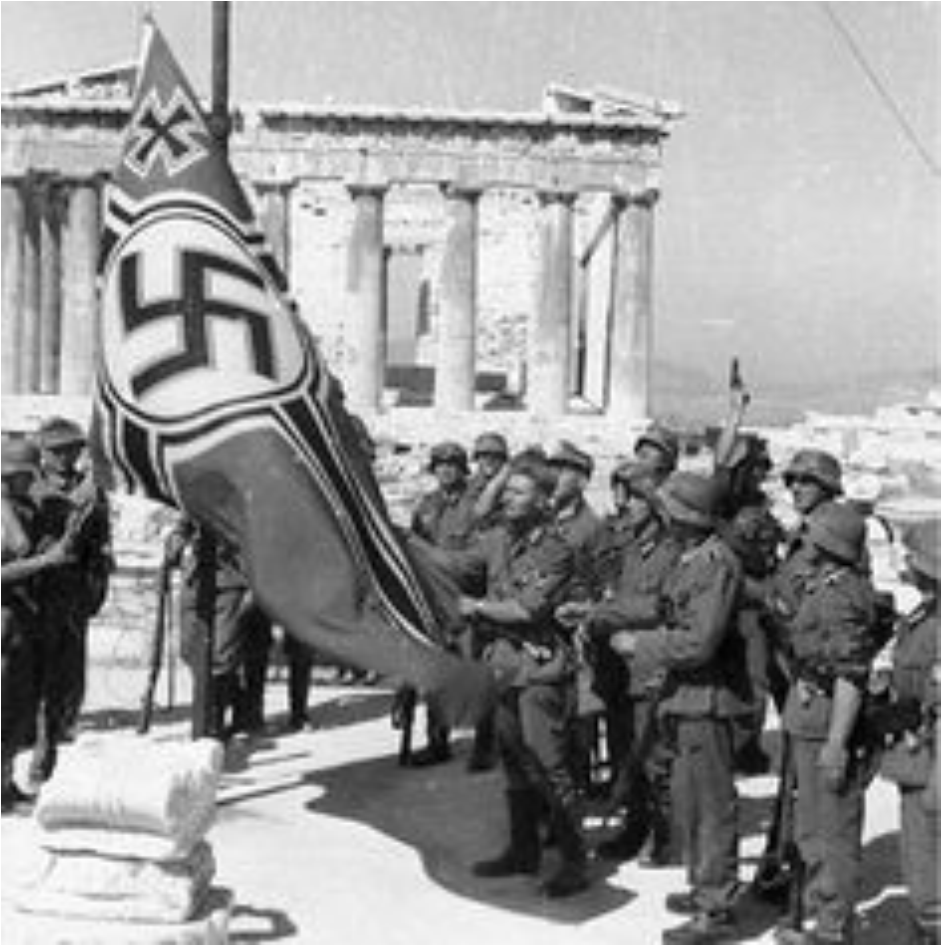 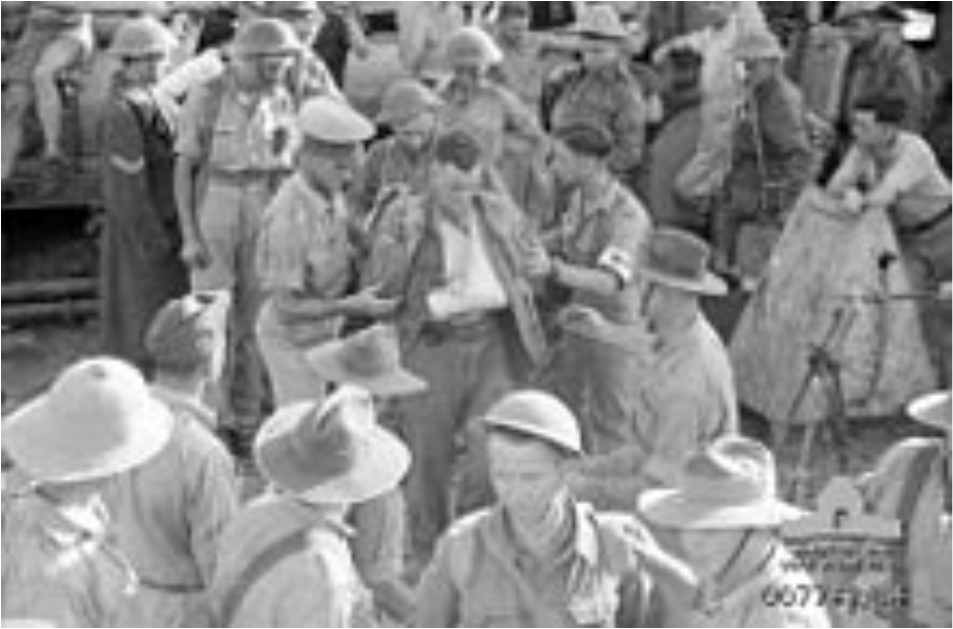 6th Division evacuees arrive in Alexandria after being taken off Crete, 2 June 1941 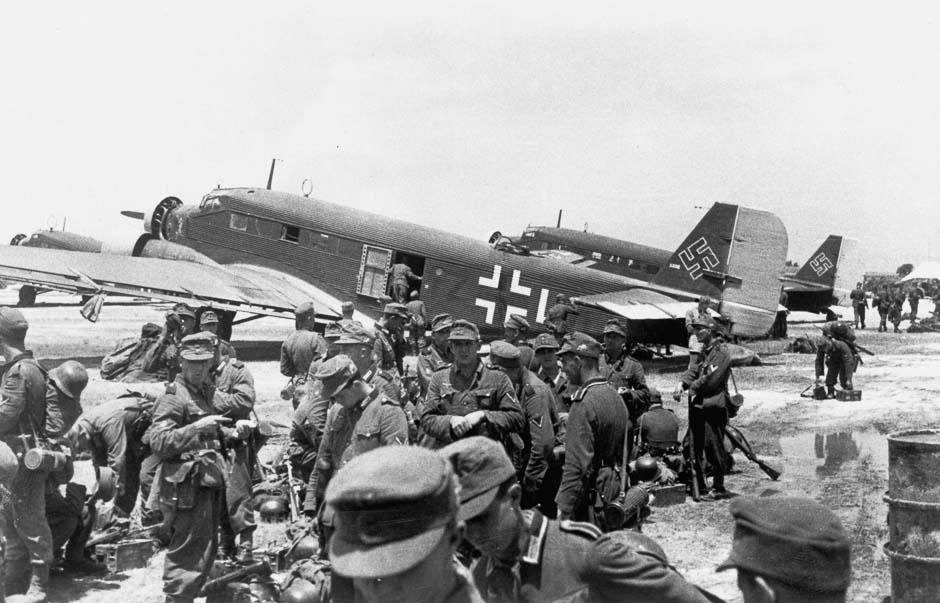 German troops from the 5th or 6th Mountain Division prepare to board Junkers Ju 52 transport aircraft for Crete. 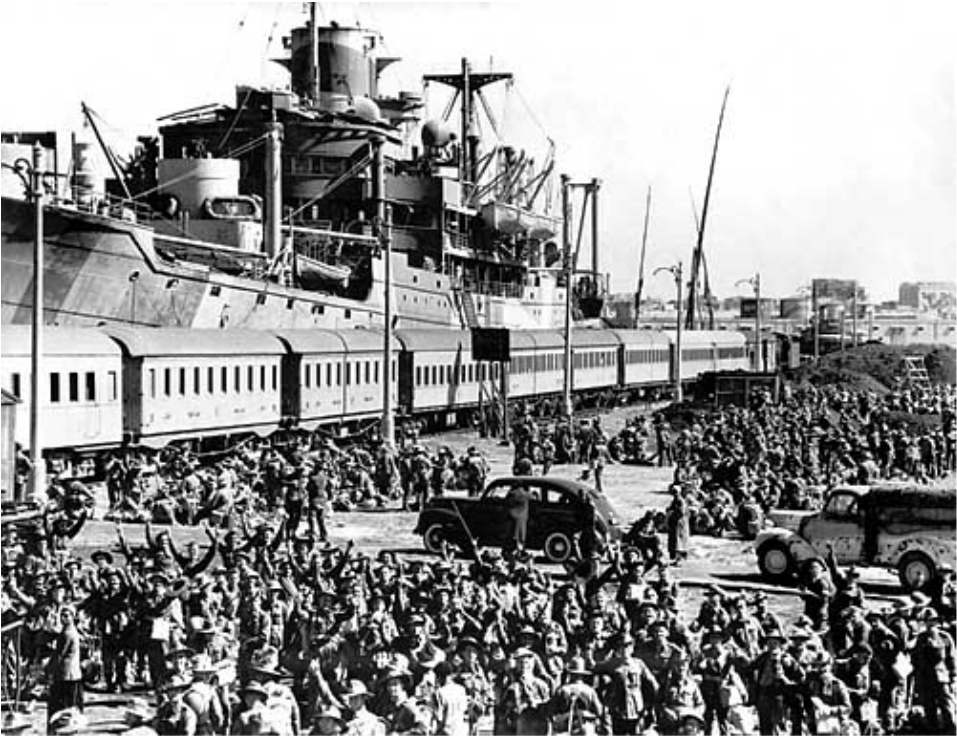 In early April 1941, Australian troops embarked for Greece from Alexandria in Egypt. 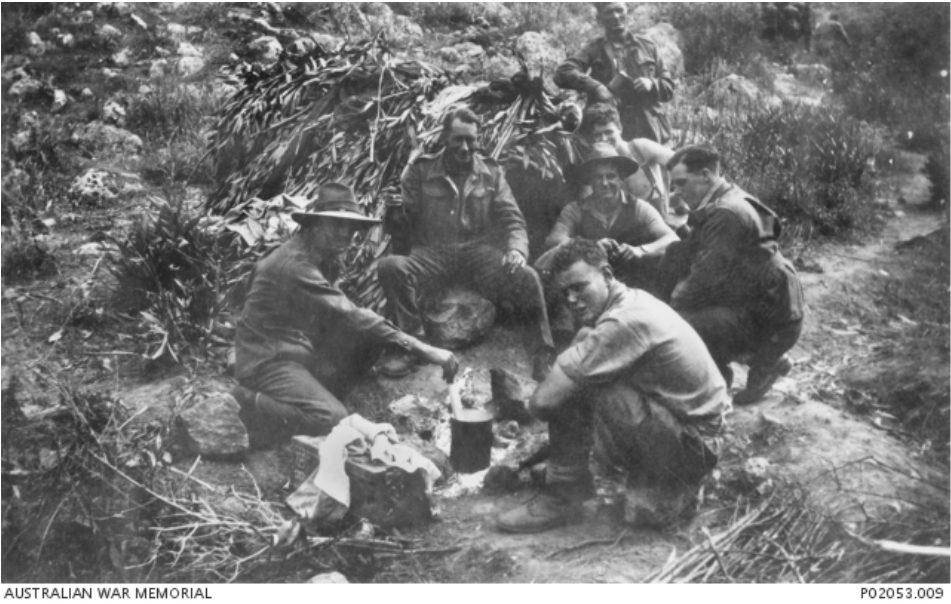 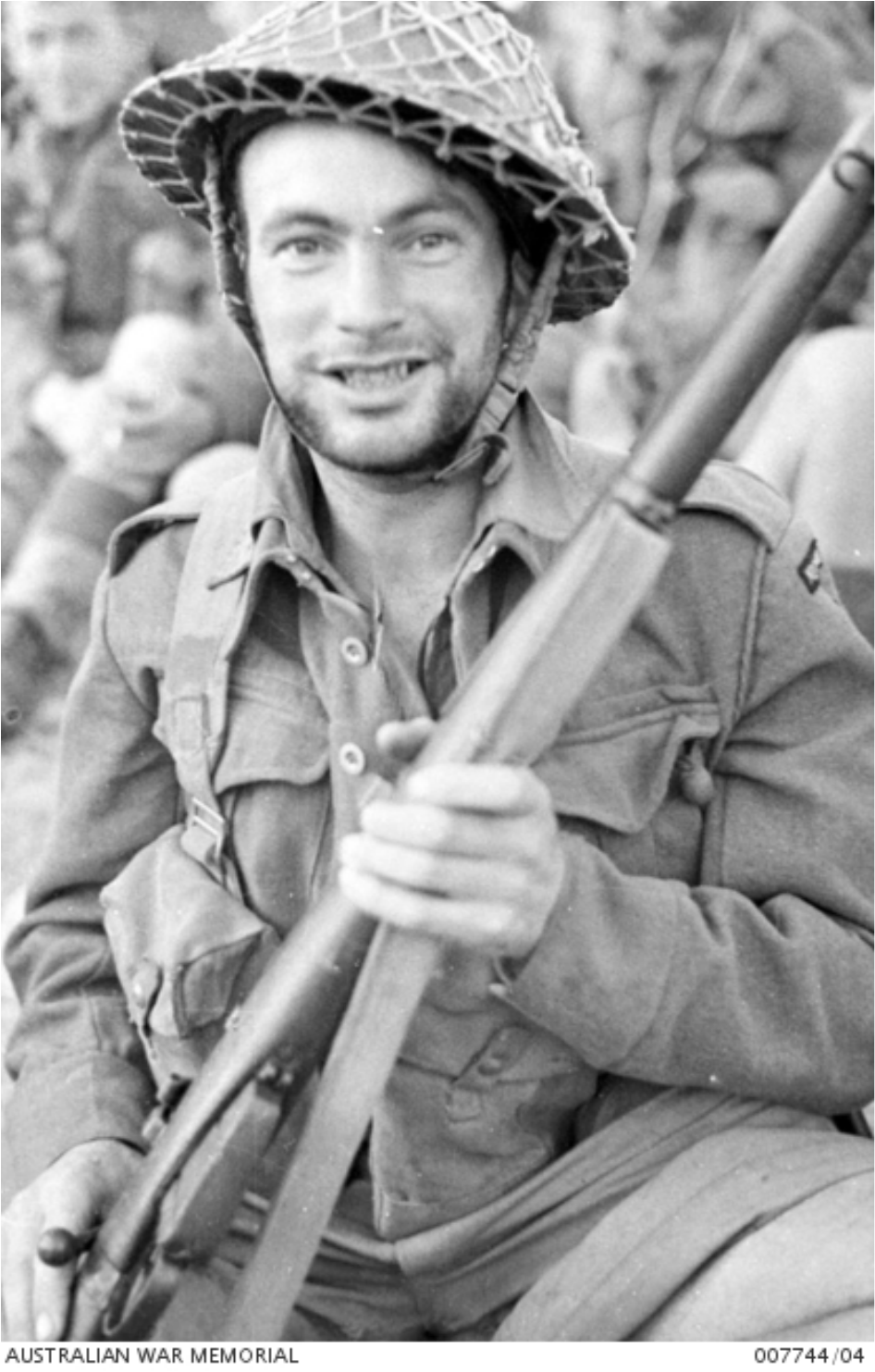 A smiling soldier of the 6th Division on the wharf at Alexandria after being evacuated from Crete aboard a destroyer. 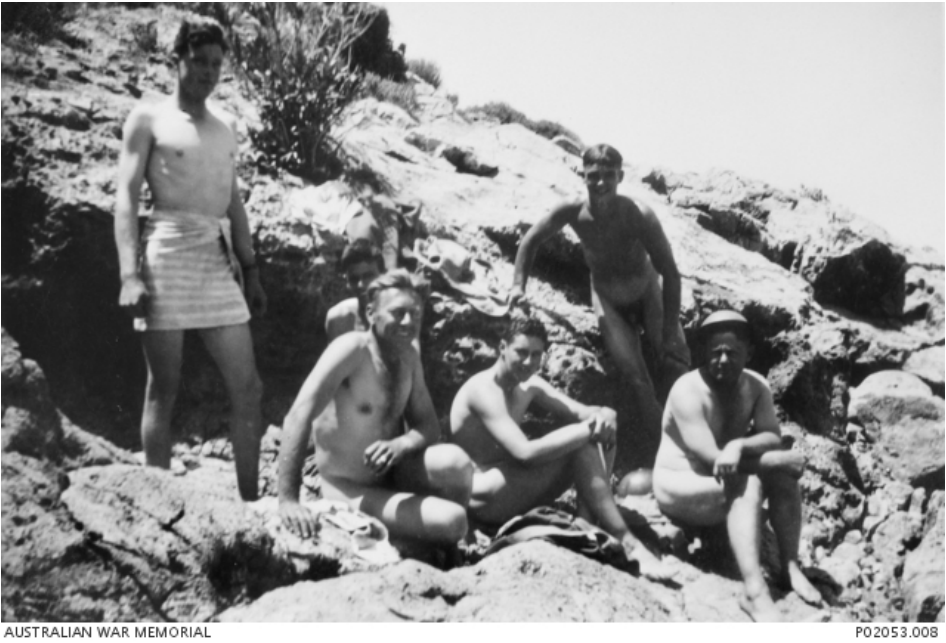 Near Suda Bay, Crete. 1941-04. A group of naked members of the 6th Division Signals relaxing on rocks after enjoying a swim at camp.
AT THE GOING DOWN OF THE SUN AND IN THE MORNING WE WILL REMEMBER THEM.