A TRUBUTE TO ALL OUR BRAVE SOLDIERS THROUGHOUT THE AGES.
MY GREAT, GREAT, GRAND PARENTS

A SKELETON IN MY FAMILY TREE 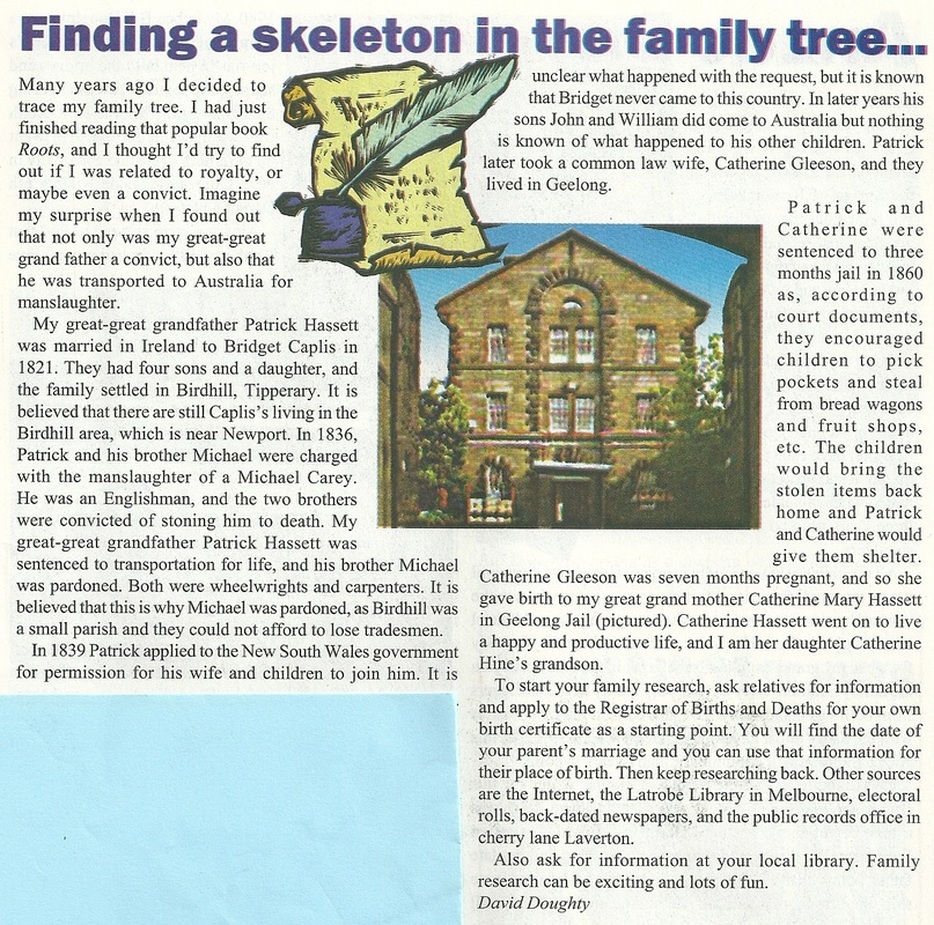 About Patrick Hassett - In 1836, Patrick was convicted of the manslaughter of Michael Carey and sentenced to transportation for life. . He was detained onboard the prison Hulk awaiting the ship that would bring him to a new land. He arrived in Sydney on 6th September, 1836, on the ship "Waterloo " (5). The Waterloo had sailed from County Cork on 21st May 1836. The voyage had taken 108 days.

He was reported to be a carpenter and wheelwright with good skills. For this reason he was picked by Latrobe to travel to Melbourne amongst other convicts for the purpose of providing labour to the Government. He applied in 1839 for Bridget and his children to be allowed to join him, but we have never been able to establish what the decision was. In later years both Maurice and William both came to Australia. Firstly William arriving pn The British Trident in 1861, then Maurice arrived on the Lady Milton in 1862.

In 1841 Patrick co-habitated with Catherine Mary Gleeson ( origins unknown, only expect she was an absconder )
Patrick Hassett's Timeline 1806

﻿BRIDGET CAPLIS  - PATRICK HASSETT   Married in about 1821 in Ireland

Patrick and his wife Bridget and family settled in Birdhill, Tipperary. It is believed that there are still Caplis's living in the Birdhill area, which is near Newport.

In 1836, Patrick and his brother Michael were charged with the manslaughter of a Michael Carey. Patrick was sentenced to transportation for life and Michael was pardoned. Both were wheel-wrights and carpenters. It is believed that this is why Michael may have been pardoned, as Birdhill was only a small parish and could not afford to lose tradesmen.

In 1839 Patrick applied to the New South Wales government for permission for his wife and children to join him. It is unclear what happened with the request, but it is known that Bridget never came to Australia. In later years his sons John and William did come to Australia but nothing is known of what happened to his other children.

Patrick took a common law wife and died in Geelong. There is no marriage certificate and the details on his Death Certificate are vague            http://www.ozatwar.com/caplice/capgaye.htm
George Leslie Buzza, 1891 - 1949 - father of my mother Edna May Ford Doughty   - George Leslie Buzza was born on month day 1891, at birth place, to William Charles Buzza and Rebecca Jane Buzza (born Caudry).
William was born on July 2 1864, in Maldon, Victoria, Australia.
Rebecca was born on May 1 1864, in Maldon, Victoria, Australia.
George had 6 siblings: Laura Buzza, Elsie May StLeger (born Buzza) and 4 other siblings.
George married Annie Cecilia Buzza.
Annie was born on March 27 1892, in Port Melbourne, Victoria, Australia.
They had 2 sons: Charles Norman Buzza and one other child.
George passed away on month day 1949, at age 57 at death place
My grand mother, Dorothy Bothwistle Ford had an affair with married man, George Lesley Buzza and as a result they had for children together - Jack Ford, Edna Ford and Stanley Ford. The children are listed as the children of Stanley Goodwin George Ford but that information is false according to a DNA test taken by Jack's daughter and my mother Edna Doughty's personal memory of meeting and speaking to George Buzza and Dorothy Bothwhistle Rainsford Ford.
Henry Doughty, 1831 - Circa 1903 Henry Doughty was born on month day 1831, at birth place, to Richard Doughty and Pamala Doughty.
Richard was born circa 1795, in Portsea Hampshire England.
Pamala was born in 1810, in Tisbury, Wiltshire, England.
Henry had 7 siblings: William Doughty, Richard Doughty and 5 other siblings.
Henry married Jane Doughty (born Miller) on month day 1858, at age 26 at marriage place.
Jane was born in 1830, in Stirlingshire, STI, Scotland.
They had 7 children: Mary Miller (born Doughty), David Richard Doughty and 5 other children.
Henry lived in 1873, at address.
He lived on month day 1894, at address.
His occupation was occupation.
Henry passed away circa 1903, at age 71 at death place.t.
AT THE GOING DOWN OF THE SUN AND IN THE MORNING WE WILL REMEMBER THEM.