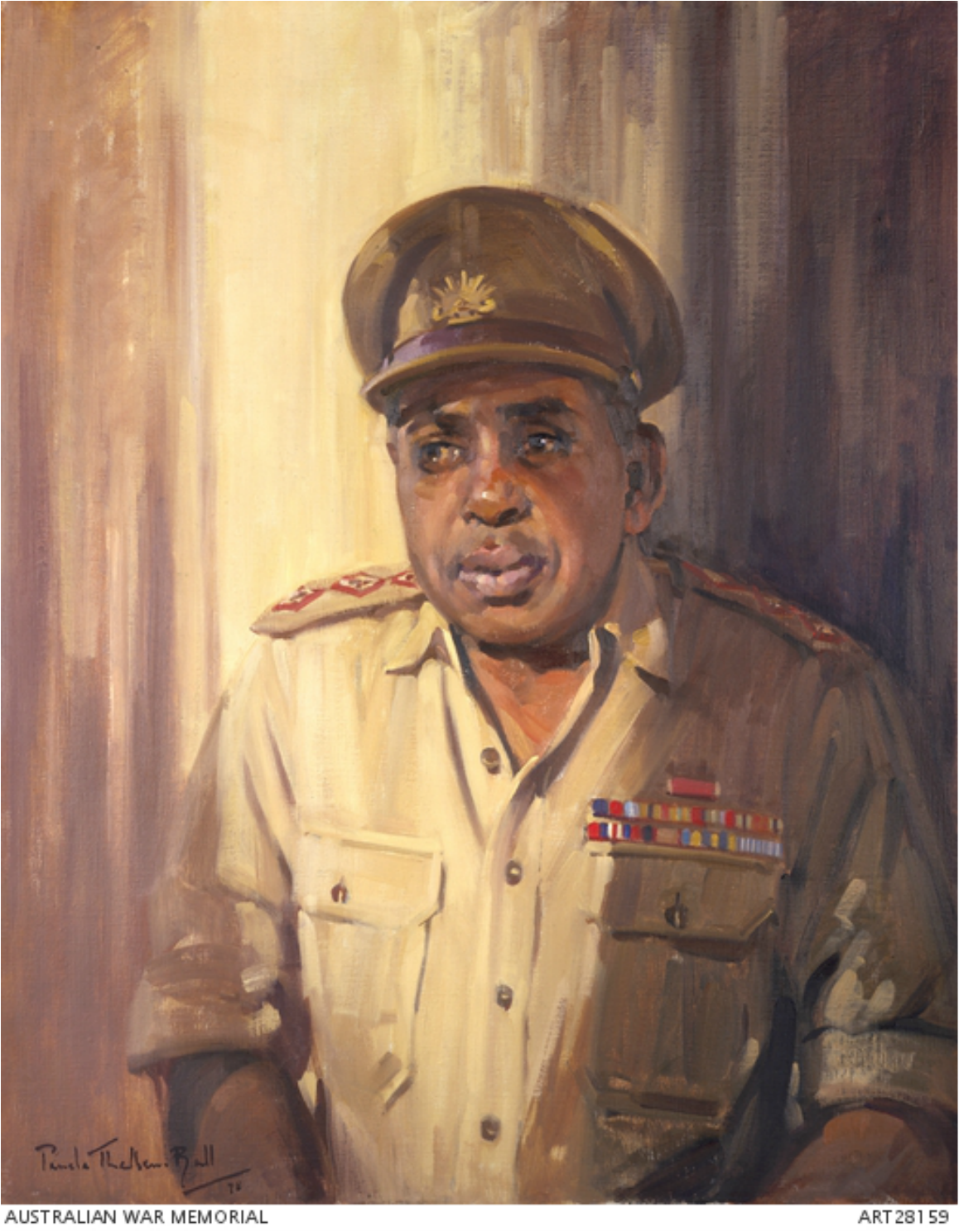 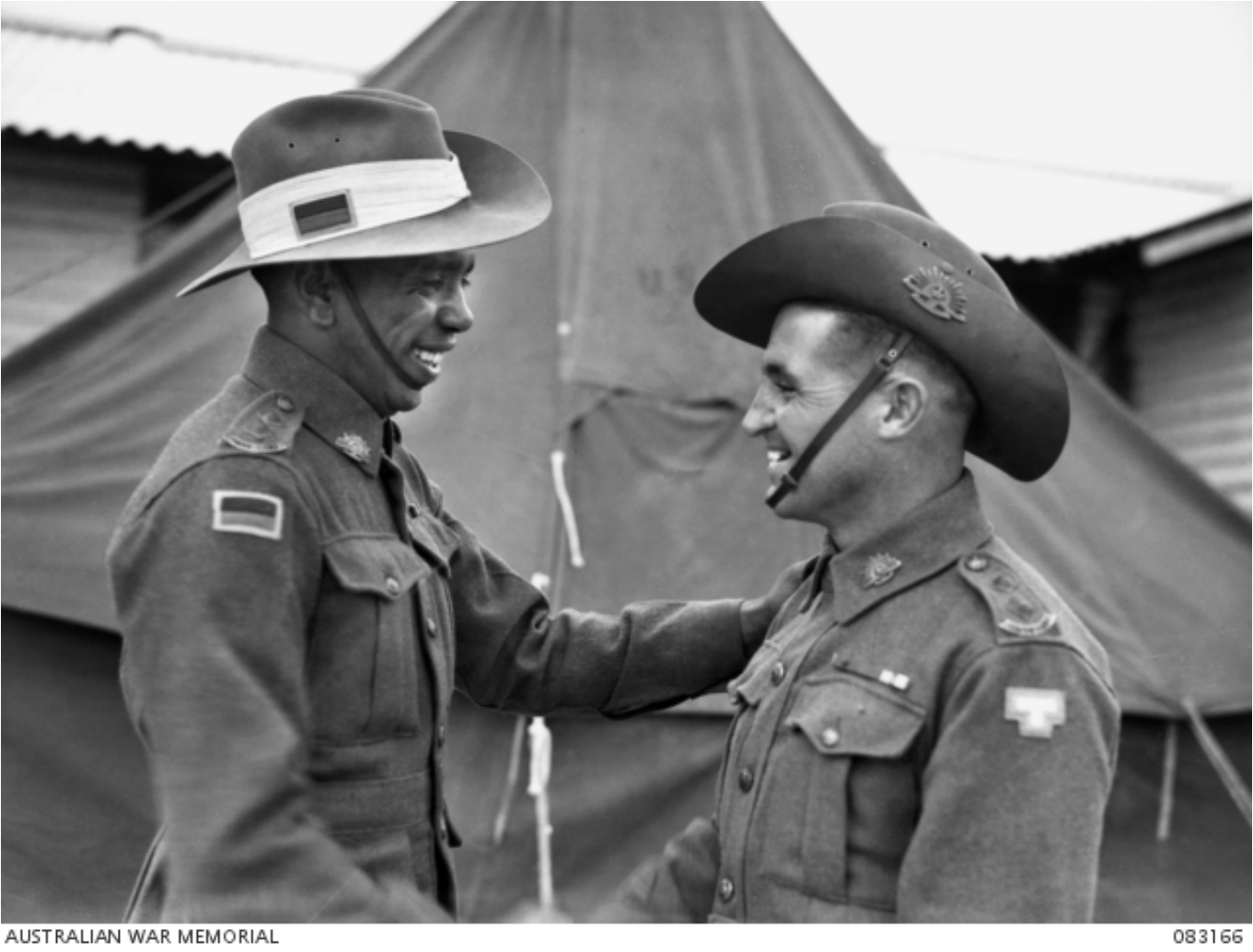 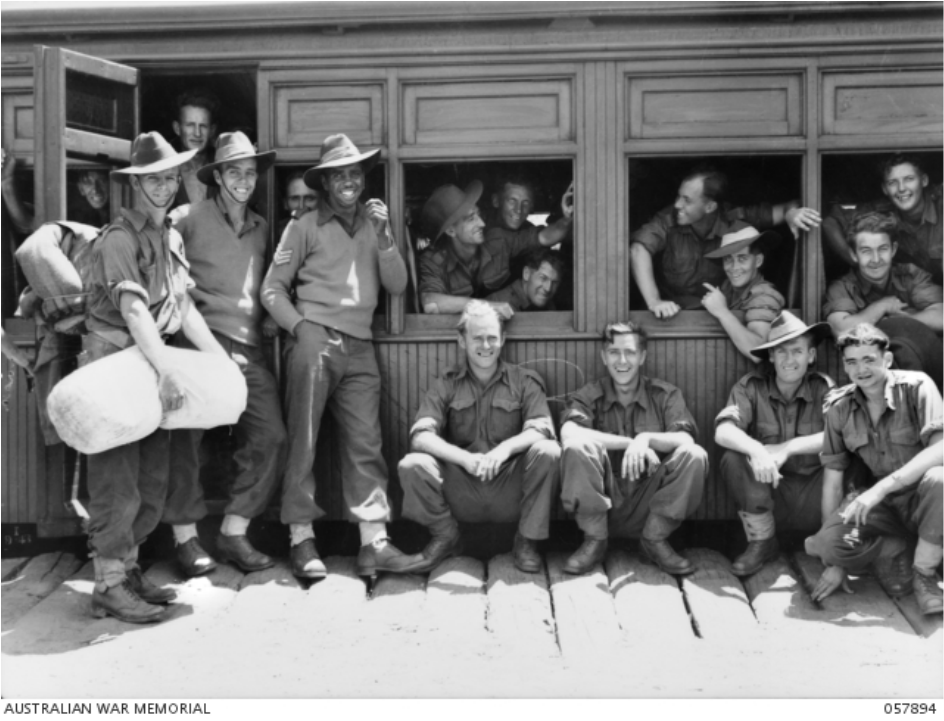 Men of the 2/7th Infantry Battalion, including Sgt Reg Saunders, waiting at their troop train in Queensland, 1943. 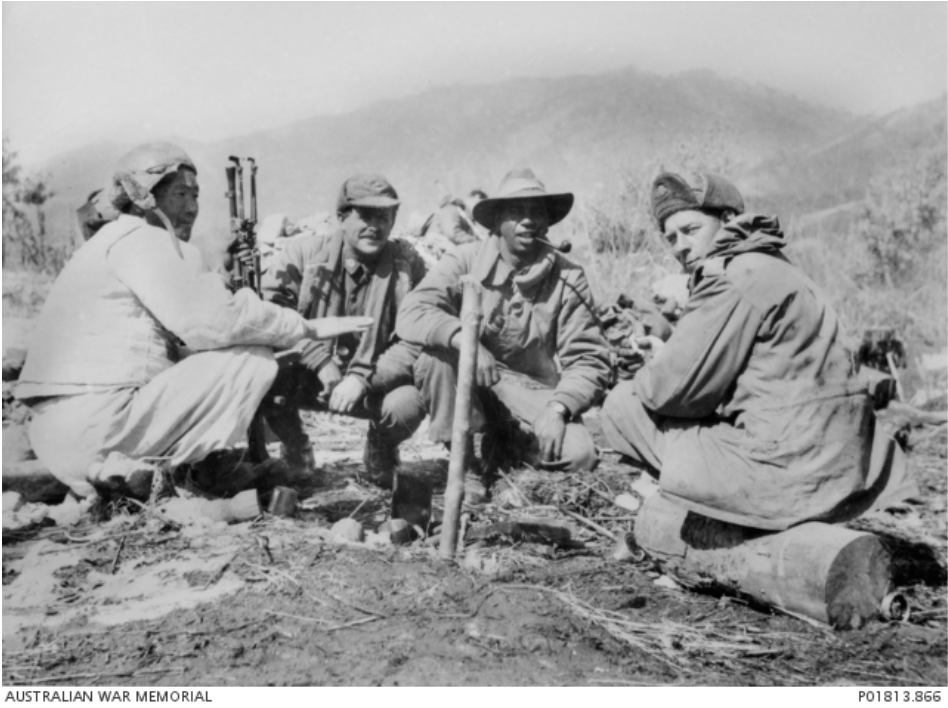 North Korea, November 1950. Reg Saunders and other soldiers from his unit, including a Korean interpreter, are gathered around a small campfire on which a billy is boiling. 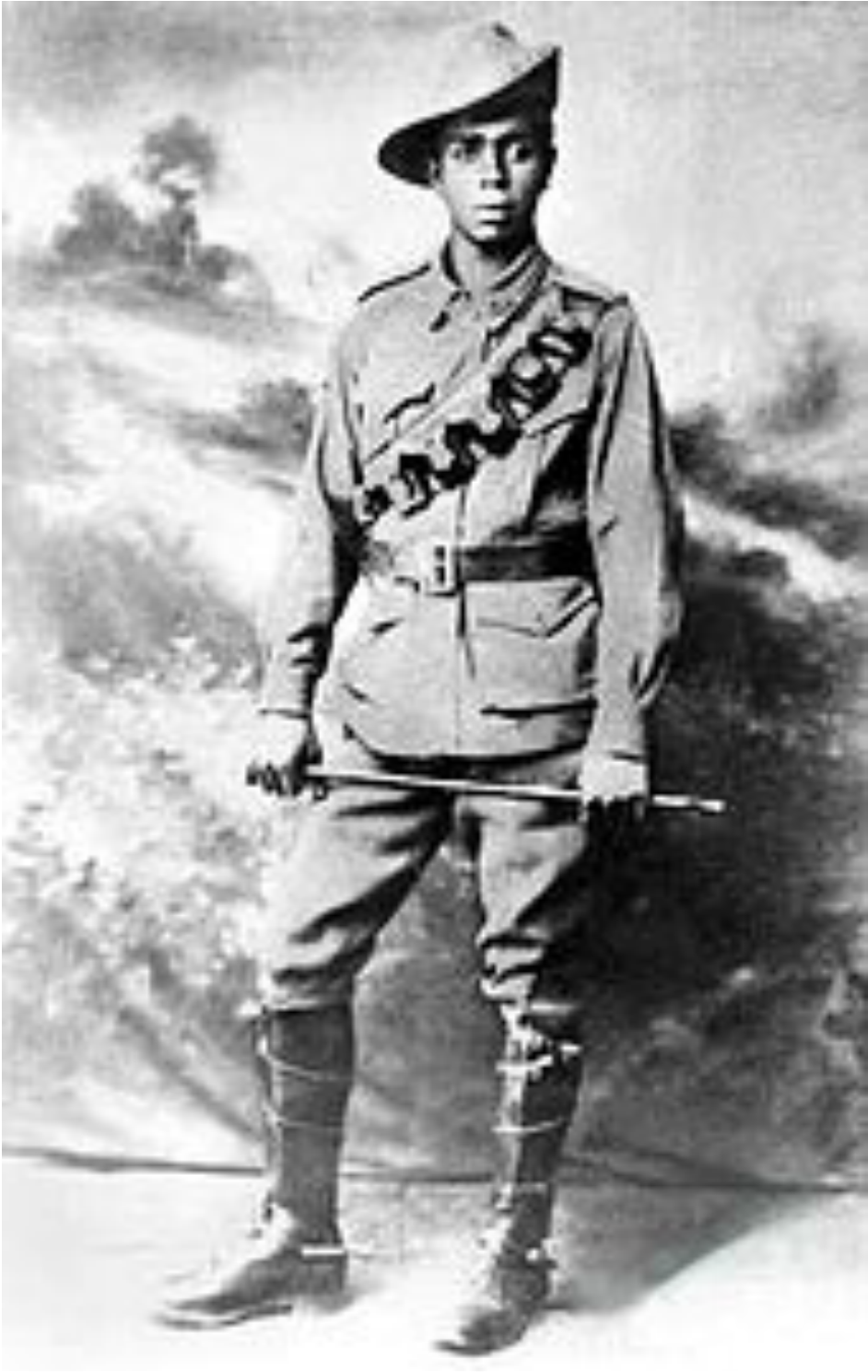 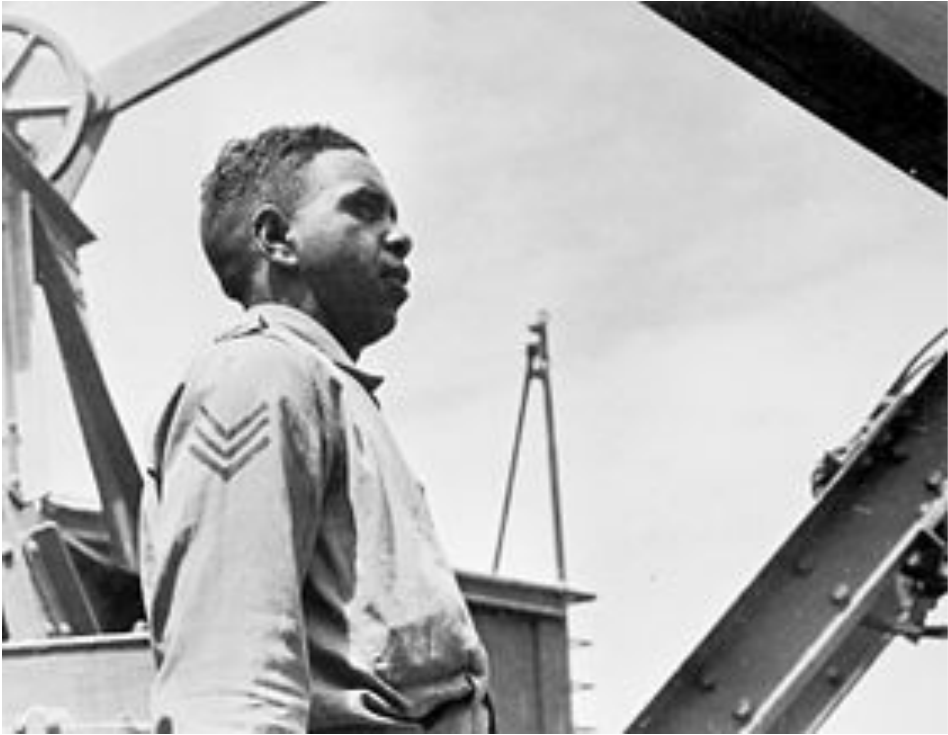 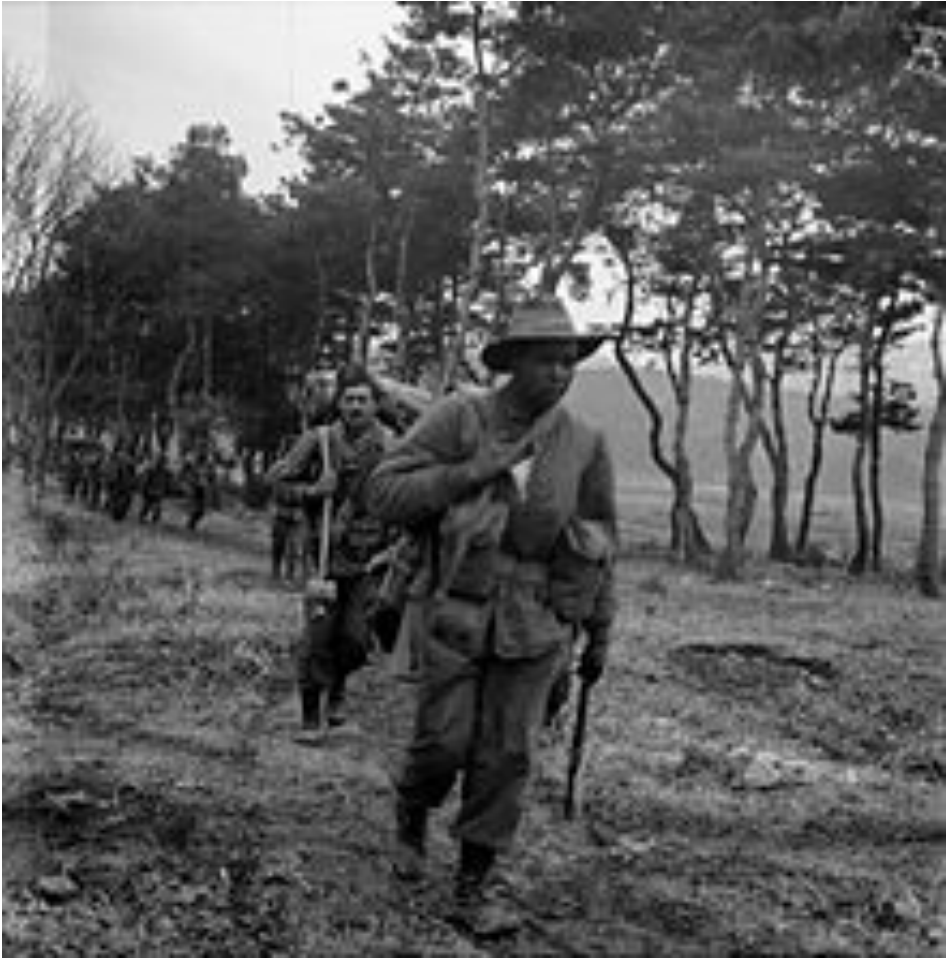 Reg Saunders leading his company in Korea
Many thousands of Australian Aboriginals have enlisted and served in Australia’s defence forces since 1901, and several have won decorations, but the first to be promoted to a commissioned rank was Reg Saunders of Victoria.

Reginald Walter Saunders was born a member of the Gunditjmara people, just outside Framlingham Aboriginal Reserve in the western district of Victoria on 7 August 1920. His father, Chris Saunders, and uncle, William Reginald Rawlings, had served with the first AIF. Reg was named after his uncle, who served in the 29th Battalion and was awarded a Military Medal for “displaying rare bravery in the performance of his duty … his irresistible dash and courage set a wonderful example to the remainder of the team”. Reg grew to admire the military feats of both his father and uncle. 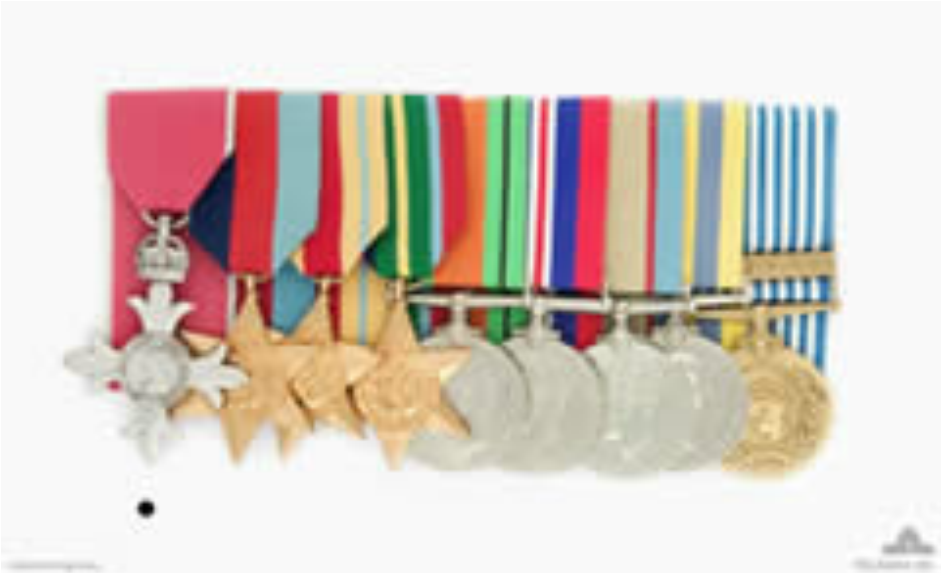 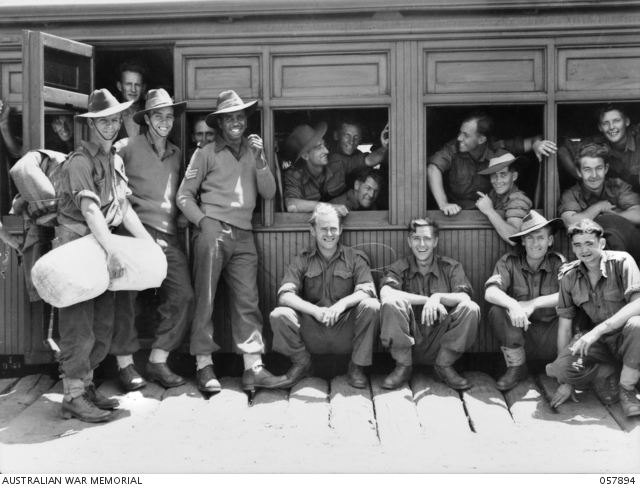 Reg’s mother died in 1924, and shortly after her death he was taken by his father, along with his brother Harry, to the Lake Condah Mission, where he received his primary education. Reg did not like being away from his family and left school at the age of 14 to go to work as a mill hand in a timber yard.

As his father and his mates talked about the First World War, Reg listened with “ears as big as footballs, taking it all in”. Listening to all this talk made Reg want to do the same. When he was given the opportunity to enlist in the Second World War, Reg and his mates “went in swarms” to join up.

Reg enlisted in the second AIF (2/7th Battalion of the 6th Australian Division) in April 1940. His outstanding leadership skills, personable character and sporting skills were quickly recognized by his superiors, as he was promoted to the rank of lance corporal within six weeks. Three months later, he was promoted to sergeant.

The first fighting Reg saw was in Libya, where he joined the battalion as a reinforcement; he took part in the continuing push to Benghazi, where he says he nearly died of fright. Then on 9 April 1941 Reg accompanied his battalion to Greece, where, under constant air attack, he took part in the fighting. The troops soon withdrew and made their way to Crete. On this trip, the ship on which he was travelling, the Costa Rica, was bombed and sunk. Reg managed to scramble aboard a destroyer.

Reg’s brother Harry was now nearing his 18th birthday; in a hurry to enlist, he convinced the recruiting officer that he was old enough, and joined the 2/14th Battalion. Reg and Harry met up while they were camped near each other in Palestine and took leave together in Jerusalem.

In Crete, Reg again took part in fighting against air attack. This was another ill-fated campaign, which saw the British evacuated from the island. Reg was one of several hundred troops left behind. After almost a full year of hiding out – an easy task for Reg, who had dark skin and could easily pass of being of Mediterranean descent – they were secretly taken off the island by a British submarine in 1941.

Soon after returning to Australia, in August 1942, Reg was posted back to the 2/7th battalion and sent to New Guinea, where he proceeded to the Owen Stanley Range. “I preferred fighting in the jungle. You had more cover in the jungle. And, being a bush boy, I was at home in the jungle, because every time you ducked down you were under cover. In the desert, if you ducked down they’d just bounce bullets off you.”

It was while Reg was serving in New Guinea that Harry was killed in action on the Kokoda Trail. It was also while he was in New Guinea that he was nominated for promotion to a commissioned rank – the first Aboriginal Australian to have reached this level of command in the Australian Army.

Reg was selected to return to Victoria and attend Officer Training School, at the Infantry Wing of the Officer Cadet Training Unit, Seymour. He graduated as a lieutenant in December, 1944.Reg spent the remainder of the war as a lieutenant in charge of a platoon of up to thirty Australians.

Reg later served in the Korean War, where he was promoted to captain in charge of “C” Company of the 3rd Battalion, and took part in the famous battle of Kapyong in 1951. It was during this battle that the battalion was awarded a US Presidential Unit Citation After having fought the battle for Hill 317, Reg finally left Korea in October 1952, and resigned from the regular army in 1954. He moved to Sydney after the war and soon became the captain of his local cricket team and president of a sub-branch of the RSL.

In 1969, Reg moved to Canberra and took up employment as liaison officer at the Department of Aboriginal Affairs, remaining there until his retirement in 1981.He was awarded an MBE in 1971, and was appointed to the Council of the Australian War Memorial in July 1985. Reg died on Friday 2 March 1991, aged 69.

A scholarship, established in Reg’s honour by the RSL, was launched in 1992 for drug and alcohol abuse studies, and is aimed at students of Aboriginal and Torres Strait Islander background. His medals and portrait are on display in the Korean War gallery of the Australian War Memorial. 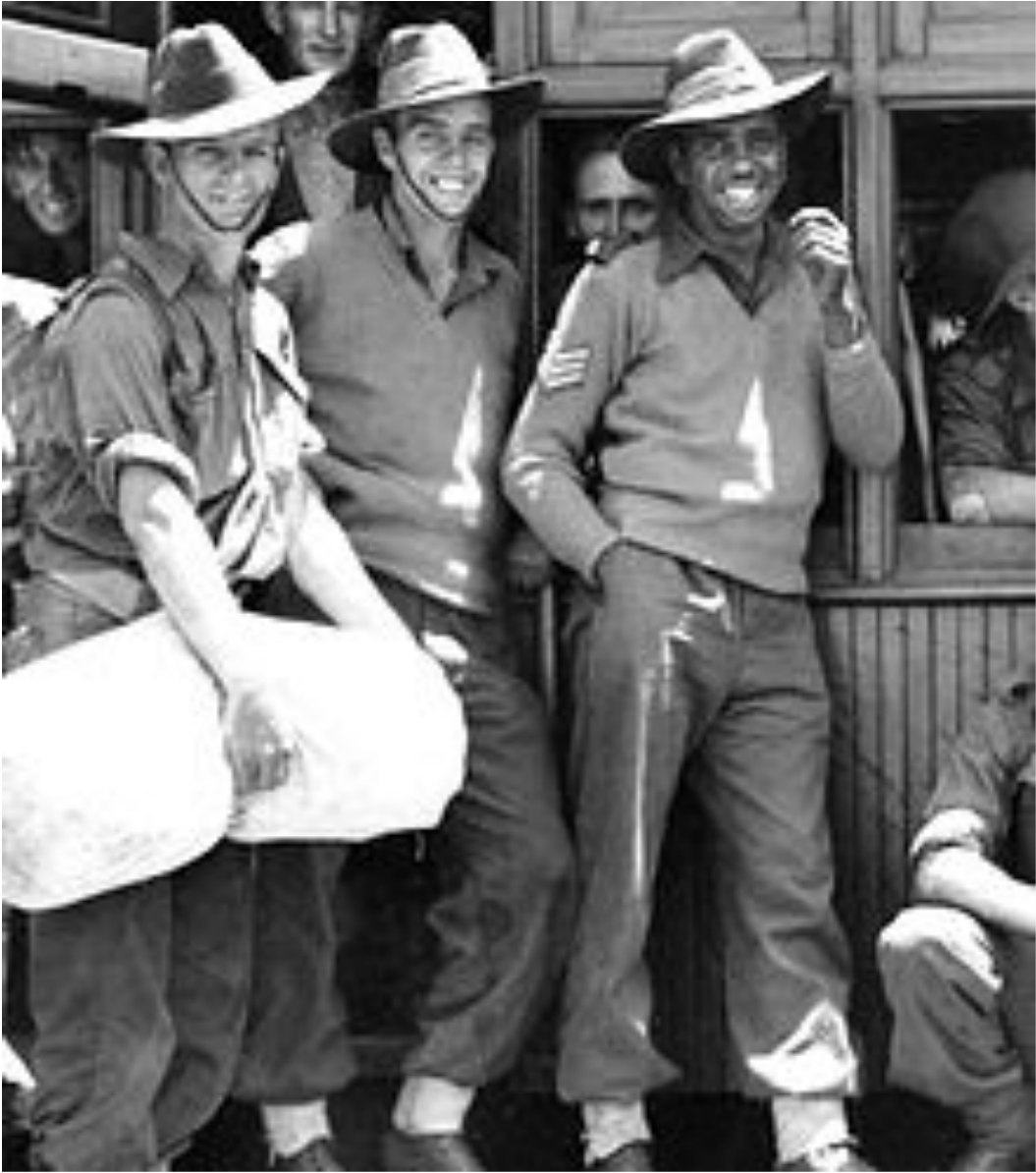 Reg Saunders 1943
AT THE GOING DOWN OF THE SUN AND IN THE MORNING WE WILL REMEMBER THEM.