During World War two, in February 1942, an American G.I. discovered a small terroir dog in a fox hole in New Guinea. He named her Smokey. He thought that maybe it was left behind by a Japanese soldier, so he took it to a POW camp and found that it didn't respond to Japanese. The soldier sold Smokey to another American G.I. William Wynne for two dollars. Over the next two years Cpl. Wynne carried Smokey in his back pack. He flew in 12 air/ sea rescue missions. Smokey survived 150 air raids on New Guinea. Smokey survived a typhoon in Okinawa. She jumped in a specially made parachute designed for her. She survived heavy fighting in the Philippines. She helped set up a telegraph line by crawling through a narrow pipe with the wire, creating a new communication line that helped save 250 ground crewmen and 40 operational fighters. What would have been a dangerous three-day digging task to place the wire was instead completed in minutes.
​In her down time Smokey performed tricks for the troops. She improved the moral for the Special Services. She visited hospitals in Australia and Korea. Smokey became the very first recorded 'Therapy Dog'. After World War Two Smokey was taken to the United States Of America as a therapy dog and was discovered by a television producer, and she was given her own television show and she became famous. She stayed with William Wynne and she worked for the next 12 years. After 14 years Smokey the wonder dog died and William Wynne buried her in an old cartridge box. 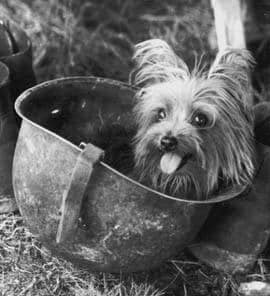